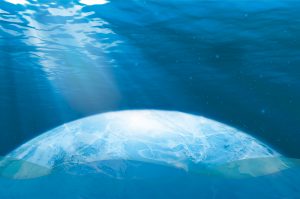 The story of oceans is the story of life. Oceans define our home planet, covering the majority of Earth’s surface and driving the water cycle that dominates our land and atmosphere. But more profound still, the story of our oceans envelops our home in a far larger context that reaches deep into the universe and places us in a rich family of ocean worlds that span our solar system and beyond. 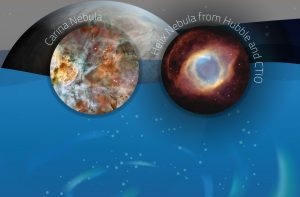 What is the origin of water?

A water molecule is made up of one oxygen and two hydrogen atoms.

Hydrogen was created in the Big Bang and oxygen in the cores of stars more massive than the Sun. Enormous amounts of water, in gaseous form, exist in the vast stellar nurseries of our galaxy.

The Hubble Space Telescope peered into the Helix Nebula and found water molecules. Hydrogen and oxygen, formed by different processes, combine to make water molecules in the ejected atmosphere of this dying star. The origins of our oceans are in the stars. 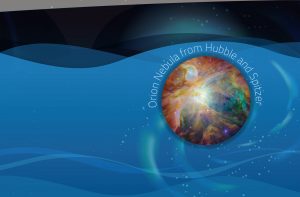 Water molecules exist in the Orion Nebula and are still forming today. The nebula is composed mostly of hydrogen gas; other molecules are comparatively rare. Even so, the nebula is so vast that it creates enough water every day to fill Earth’s oceans 60 times over. Water, along with every other molecule created in these stellar nurseries, becomes raw material for the formation of new planetary systems. 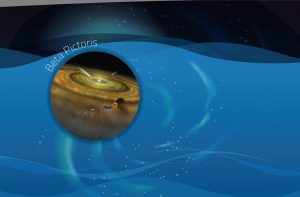 Water molecules are abundant in planetary systems forming around other stars.

Water molecules have been found around the 20-million-year-old star Beta Pictoris, where a huge disk of dust and gas hints at collisions between comets, asteroids, and young planets (artist’s conception).

How Did Water Arrive on Earth? 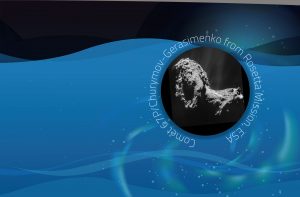 Asteroids and comets are debris left over from the formation of our solar system and are rich in water.

These small bodies are time capsules that contain tantalizing clues about what our solar system was like 4.5 billion years ago.

Most asteroids orbit the Sun between the planets Mars and Jupiter, but many swing nearer to Earth and even cross our orbit. Comets are found in the outer reaches of our solar system, either in the Kuiper Belt just beyond the orbit of Pluto, or in the vast, mysterious Oort Cloud that may extend halfway to the nearest star. 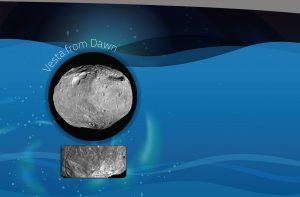 Over billions of years, countless comets and asteroids have collided with Earth, enriching our planet with water. Chemical markers in the water of our oceans suggest that most of the water came from asteroids. Recent observations hint that ice, and possibly even liquid water, exists in the interiors of asteroids and comets.

How are our oceans changing? 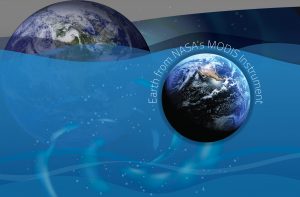 Water on Earth is very abundant— about 71 percent of Earth’s surface is covered by water.

There are more than 326 million trillion gallons of water on Earth. Earth’s oceans contain about 96.5 percent of all the planet’s water.

Less than 3 percent of all water on Earth is freshwater (usable for drinking).

More than two-thirds of Earth’s freshwater is locked up in ice caps and glaciers. 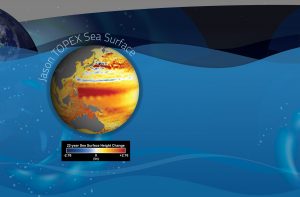 Changing sea levels will affect everyone on our planet, and NASA has been monitoring these trends for decades.

As global temperatures increase, the ocean responds by expanding.

Factoid: Ocean levels are currently rising at the rate of 0.13 inches per year. 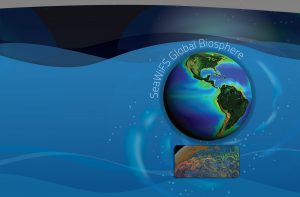 Earth’s oceans are teeming with life, which creates changes in ocean color that are visible from space. Tiny plants, phytoplankton, bloom for hundreds of miles, coloring the oceans and giving us clues about complex marine ecosystems.

Driven by wind, temperature, salinity, and other forces, currents on the ocean surface cover our planet. Some span hundreds to thousands of miles across vast ocean basins in well-defined flows. Others are confined to particular regions and form slow-moving, circular pools. This visualization is based on data collected during field observations and by NASA satellites.

Do planets lose their oceans over time? 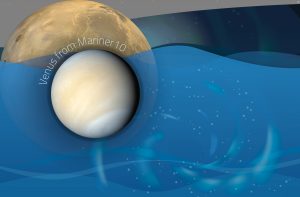 Billions of years ago, Venus may have been our solar system’s first ocean world. Venus lacks a strong global magnetic field, which on Earth, helps to protect our atmosphere. A runaway greenhouse effect raised temperatures enough to boil off the water, which escaped into space due to the solar wind. 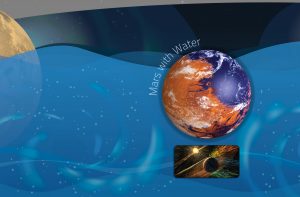 Mars was once much more Earth-like, with a thick atmosphere, abundant water, and global oceans (as in this artist’s conception).

Billions of years ago, Mars lost its protective global magnetic field, leaving it vulnerable to the effects of our Sun: solar wind and space weather.

The MAVEN mission has measured Mars continuing to lose its atmosphere to the Sun at the rate of nearly 400 kilograms per hour.

Scientists estimate that Mars has lost approximately 87 percent of the water it had billions of years ago. 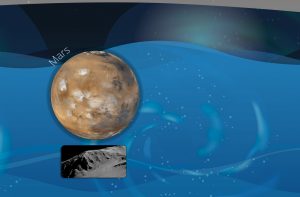 Most of the remaining water on Mars is frozen in the ice caps or trapped beneath the soil, but a small amount of muddy, brackish water can be seen moving down the side of Martian hills in the local summer.

Oceans of Our Solar System

Which worlds of our solar system have oceans of their own?

Earth isn’t the only ocean world in our solar system. Water on other worlds exists in diverse forms on moons, dwarf planets, and even comets. Ice, water vapor in the atmosphere, and oceans on other worlds offer clues in the quest to discover life beyond our home planet. 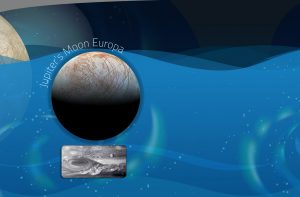 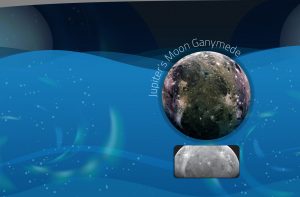 Ganymede is the largest moon in our solar system, and the only moon with its own magnetic field. Recent studies indicate a large underground saltwater ocean is present. Ganymede could in fact have several layers of ice and water sandwiched between its crust and core. 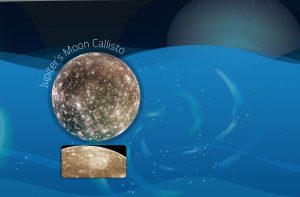 Callisto’s cratered surface lies at the top of an ice layer, which is estimated to be about 124 miles (200 km) thick. An ocean, which is thought to be at least 6 miles (10 km) deep, could be directly beneath the ice. 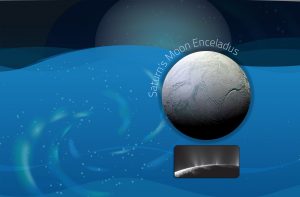 Scientists predict that a regional reservoir about 6 miles (10 km) deep lies under a shell of ice 20 to 25 miles( 30 to 40 km) thick at Enceladus’ south pole. This underground ocean is thought to feed the moon’s impressive jets, which spray from deep fissures (called “tiger stripes”) in the moon’s surface. 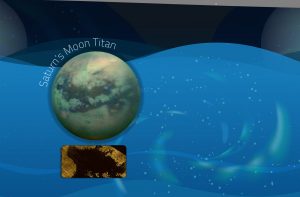 Titan is believed to have a salty subsurface ocean—as salty as the Dead Sea on Earth— beginning about 30 miles (50 km) below its ice shell. It is also possible that Titan’s ocean is thin and sandwiched between layers of ice, or is thick and extends all the way down to the moon’s rocky interior. 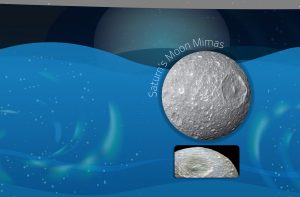 Research suggests that Mimas has either a subsurface ocean or that its core is shaped like a football. If Mimas is hiding a liquid water ocean, it lies 15 to 20 miles (25 to 30 km) beneath the moon’s impact-battered surface. 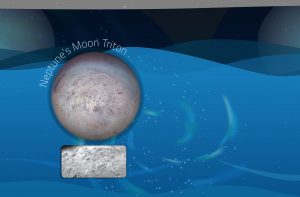 Active geysers on Triton spew nitrogen gas, making this moon one of the known active worlds in the outer solar system. Volcanic features and fractures mark its cold, icy surface, likely results of past tidal heating. A subsurface ocean at Triton is considered possible, but is unconfirmed. 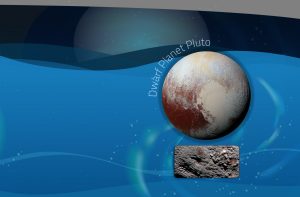 With towering mountains of water ice and flowing glaciers of nitrogen and methane ice, Pluto is a surprisingly active world. Mysterious fault lines, some hundreds of miles long, may suggest that Pluto has a hidden subsurface ocean.

Are there oceans on planets around other stars? 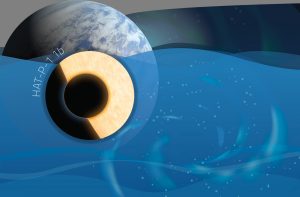 Water vapor has been discovered on a planet roughly the size of Neptune; the smallest exoplanet known to have water. HAT-P-11b is 120 light years away in the constellation Cygnus and sits close to its star in a five-day orbit. This world is likely too warm for oceans, but has water vapor and clear, cloudless skies. 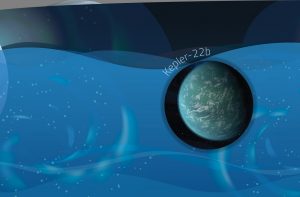 Kepler-22b is the first planet in a confirmed orbit in a star’s habitable zone—the region around a star where liquid water could persist on its surface. Kepler-22b is a “super-Earth,” about 2.4 times Earth’s size. Scientists do not yet know if the planet has a rocky, gaseous, or liquid composition. It’s possible that the world would have clouds in its atmosphere. 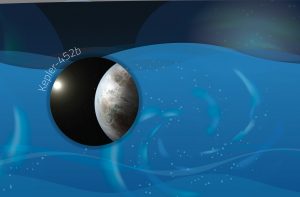 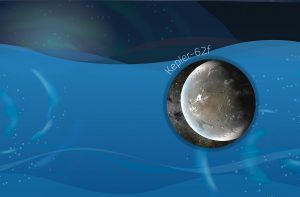 The five planets of Kepler-62 orbit a star two-thirds the size of the Sun and only one-fifth as bright. At 7 billion years old, the system is older than our Sun.

Kepler-62 is home to two habitable zone worlds, Kepler-62f and Kepler-62e. Kepler-62f orbits every 267 days and is only 40 percent larger than Earth, making it one of the smallest exoplanets known in the habitable zone of another star.