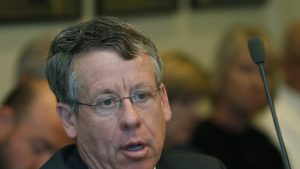 An Oklahoma lawmaker personally propagated an article over the weekend calling for a “final solution” regarding “radical Islam,” arguing that the 1,400-year-old faith is not a religion and should not be protected under the first amendment of the Constitution.

On Sunday, Oklahoma State Rep. Pat Ownbey re-published an article to his Facebook page entitled “Radical Islam – The Final Solution.” The article was originally published on the personal blog of Paul R. Hollrah, an Oklahoman who touts himself as a “retired government relations executive,” but Ownbey appears to have copy-pasted the piece and reposted it in its entirety, citing Hollrah.

The author is seemingly unaware that the phrase “the final solution” was used by Adolph Hitler and Nazi leadership to describe the horrific genocide enacted against Jews by the Third Reich during World War II, also known as the Holocaust. Instead, the article Ownbey shared purports that in light of the recent massacre of 49 people at a gay nightclub in Orlando by an ISIS-affiliated shooter, Islam should no longer be categorized as a religion in the United States — or in any western nation.

“…if we in the west are to protect our children and grandchildren from the horrors of a worldwide Islamic caliphate, we must first dispense with the cruel fiction that Islam is just another religious denomination, subject to all of the legal protections afforded legitimate religious sects,” Hollrah argues. “Islam is not a religion, subject to First Amendment protections, as we in western cultures understand the term. Rather, it is a complete political, legal, economic, military, social, and cultural system with a religious component.”

Hollrah — who, like presumptive Republican presidential nominee Donald Trump, appears to be opposed to Muslim immigration into the United States — goes on to blast Christian traditions such as the Catholic Church that take a welcoming approach to Islam, accusing them of being naive. He then defends Trump’s Muslim ban by citing the Communist Control Act of 1954 before insisting that the West “quarantine” all Muslims.

“And since the 95% of Muslims who are described as either ‘moderate’ or ‘un-radicalized’ appear unwilling to play an active role in keeping their radicalized brethren in check, we have no long term alternative but to quarantine them… prohibiting them from residing anywhere within the civilized nations of the Earth,” he writes.

The argument that Islam is somehow not a religion has attracted attention in right-wing circles recently, with conservative leaders such as Pat Robertson positing that the faith is actually a political ideology. However, the argument appears to have no basis in established religious studies or religion scholarship, where religions have long been recognized as having political components, and where the very definition of religion has been debated by scholars for decades.

Moreover, the idea that Islam is somehow uniquely political has no basis in fact. The Vatican is an independent country with observer status in the United Nations, with the Pope — a globally recognized religious leader — as its head of state. Israel is an unabashedly Jewish state. Cambodia, Sri Lanka, and Thailand all recognize Theravada Buddhism as their official state religion.

Hollrah also asserted that Islam is somehow uniquely violent, a meme that has been repeated by Republican politicians such as former Pennsylvania senator Rick Santorum. Yet ostensibly Christian theology was a key component of Europe’s Wars of Religion, European colonization, Manifest Destiny in the United States, and the institution of slavery — global movements that lead to the deaths of millions. And in modern-day Central Africa, the United Nations reports that the Lord’s Resistance Army — a group that claims to be Christian and seeks to forge a theocratic state based on the Ten Commandments — forcibly recruits child soldiers, terrorizes villages, and is responsible for the deaths of 100,000 Ugandans and the displacement of 1.7 million in the region.

The political dimensions of Christianity have been a point of controversy in Oklahoma recently, where the state remains locked in debate over whether a monument commemorating the Biblical Ten Commandments should be allowed to remain on the grounds of the State Capitol. Ownbey spoke out in favor of the monument last year, arguing that it should be protected under the freedom of religion.

The state Supreme Court ruled last June that the monument had to be removed, but the Oklahoma House adopted a resolution in March asking voters to return the monument to the capitol by striking a section of the state’s constitution that reads “public money or property cannot be used directly or indirectly for any sect, church, denomination, or system of religion.”

Ownbey voted in favor of the resolution.