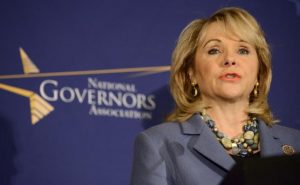 An Oklahoma bill that could revoke the license of any doctor who performs an abortion has headed to the governor, with opponents saying the measure in unconstitutional and promising a legal battle against the cash-strapped state if it is approved.

In the Republican-dominated legislature, the state’s House of Representatives overwhelmingly approved a Senate bill late on Thursday. Governor Mary Fallin, a Republican, has not yet indicated whether she will sign it.

Under the bill, doctors who perform abortions would risk losing their medical licenses. Exemptions would be given for those who perform the procedure for reasons including protecting the mother or removing a miscarried fetus.

“This is our proper function, to protect life,” said Senator Nathan Dahm, the Republican who authored the bill.

A handful of representatives argued against the bill, saying it violated the Constitution by prohibiting a doctor from performing a medical procedure that was legal under law.

“Oklahoma politicians have made it their mission year after year to restrict women’s access vital health care services, yet this total ban on abortion is a new low,” said Amanda Allen, senior state legislative counsel at the Center for Reproductive Rights.

The lobbying group and several other abortion rights organizations have promised court challenges if the bill is enacted.

Supporters of the bill said it will help protect the sanctity of life.

“If we take care of morality,” bill supporter David Brumbaugh, a Republican, said during deliberations, “God will take care of the economy.”