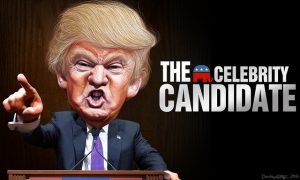 “It has been well said that ‘sooner or later, we all sit down to a banquet of consequences.’ The Republican Party’s multicourse banquet has begun.” – George F. Will

A piece in the Washington Post caught my attention not only because of the subject, but also because of who penned it.

In “Trump’s Shallowness Runs Deep,” the author recalls the 1870s period, the days of Boss Tweed’s Tammany Hall, and the 1950s and 1960s, “when Chicago’s Democratic machine was especially rampant…”

[During those years], there was a phenomenon that can be called immunity through profusion: Fresh scandals arrived with metronomic regularity, so there was no time to concentrate on any of them. The public, bewildered by blitzkriegs of bad behavior, was enervated.

The author then comments on the present GOP presidential nominee’s speeches “…syntactical train wrecks, but there might be method to his madness. He rarely finishes a sentence (‘Believe me!’ does not count), but perhaps he is not the scatterbrain he has so successfully contrived to appear. Maybe he actually is a sly rascal, cunningly in pursuit of immunity through profusion.”

The author points out how Trump “seems to understand that if you produce a steady stream of sufficiently stupefying statements, there will be no time to dwell on any one of them, and the net effect on the public will be numbness and ennui,” and provides some examples:

Trump’s ignorance of the fact that Putin had already occupied Crimea and his claim that “what has happened to Crimea is sort of democratic because ‘from what I’ve heard,’ the people of Crimea ‘would rather be with Russia than where they were.’”

…Trump expressed his displeasure with the schedule for presidential debates, two of which are on nights with nationally televised NFL games. (There are such games three nights each autumn week.) “I got a letter from the NFL,” Trump claimed, “saying this is ridiculous.” The NFL says it sent no such letter.

The author recalls his “immunity through profusion” premise:

But before this Trump fib/figment of his imagination/hallucination can be properly savored, it will be washed away by a riptide of others. Immunity through profusion.

As to the lasting damage being done to our nation by Trump’s “success in normalizing post-factual politics”:

It is being poisoned by the injection into its bloodstream of the cynicism required of those Republicans who persist in pretending that although Trump lies constantly and knows nothing, these blemishes do not disqualify him from being president.

The author points out that even Trump’s running mate is “doing his well-practiced imitation of a country vicar saddened by the discovery of sin in his parish.” Commiserating with Pence, the author deplores Trump’s name-calling as “just the most recent example of how the rubble of ruined reputations will become deeper before Nov. 8.”

George Will concludes, “It has been well said that ‘sooner or later, we all sit down to a banquet of consequences.’ The Republican Party’s multicourse banquet has begun.”

When asked at the Federalist Society lunch where Will announced his decision, what conservative anti-Trumpers should do now, Will simply said, “Make sure he loses.”

And, of course, shallow Donald Trump has criticized George Will in the past. At a rally last November, Trump said of Will, “You know he looks smart because he wears those little glasses…If you take those glasses away from him, he’s a dummy,” confirming the substance of the title of Will’s piece, “Trump’s shallowness runs deep.”

Mr. Will was one of the first conservatives to disavow the vulgarity and shallowness of Trump. More are following in his footsteps.

Hopefully the trickle will soon become a stream, thereby saving the Party and possibly the nation from having to sit down to a banquet of consequences.