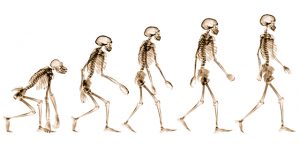 The unexpected ability of an RNA polymerase ribozyme to copy RNA into DNA has ramifications for understanding how DNA genomes evolved.

For as long as history has been recorded, humanity has tried to answer the ancient question of our origins. The ‘central dogma’ of molecular biology, first stated by Francis Crick in 1958, represented a major step forward in our efforts to answer this question (Figure 1A; Crick, 1958). In this model, the genetic information stored in DNA is transcribed to produce RNA, which is then translated by the ribosome to produce chains of amino acids. These chains fold to make the proteins that are responsible for almost everything that happens in cells. 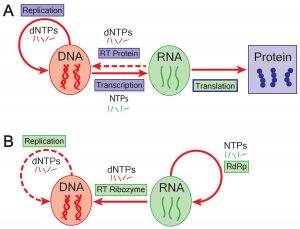 The emergence of DNA genomes in the RNA world.

The flow of information from DNA to RNA to protein is thought to have evolved out of a simpler evolutionary period when genetic information was stored and transmitted solely by RNA molecules. This theory, known as the ‘RNA world hypothesis’, posits that an RNA enzyme or ‘ribozyme’ capable of copying RNA molecules existed early in evolution, and that protein synthesis by the ribosome (which is also an RNA enzyme) evolved out of this system (Figure 1B; Gilbert, 1986; Atkins et al., 2011). The theory, however, is largely silent on how DNA genomes evolved.

In modern metabolism, protein-based enzymes called reverse transcriptases can copy RNA to produce molecules of complementary DNA. Other enzymes can promote the production of DNA nucleotides (the building blocks of DNA molecules) from RNA nucleotides via challenging chemical reactions. So how did the first DNA genomes come to be? There are two possibilities within the framework of the RNA world. In the first, protein enzymes evolved before DNA genomes. In the second, the RNA world contained RNA polymerase ribozymes that were able to produce single-stranded complementary DNA and then convert it into stable double-stranded DNA genomes.

A number of laboratories around the world are trying to build ribozymes that can sustain RNA replication (Wang et al., 2011; Attwater et al., 2013). Recently, David Horning and Gerald Joyce artificially evolved a ribozyme that is capable of copying complex RNAs and amplifying short RNA templates (Horning and Joyce, 2016). Now, in eLife, Joyce and Biswajit Samanta at the Salk Institute demonstrate that this ribozyme is also a reverse transcriptase (Samanta and Joyce, 2017). Feeding DNA nucleotides to this ribozyme enabled it to copy short segments of RNA templates into complementary DNA. This suggests that if an RNA world contained DNA nucleotides, DNA genomes could have been assembled and then presumably replicated by ribozymes.

Demonstrating that DNA polymerase ribozymes are able to rapidly use such DNA nucleotides would represent a major step forward for the early DNA genome model. While the field of artificial RNA polymerase ribozymes has made rapid strides, their ability to add multiple nucleotides rapidly is still very limited. Current ribozymes are significantly longer and more complex than the sequences that they are able to copy, but to make self-evolving systems, ribozymes need to be able to copy sequences that are longer and more complex than themselves. It will therefore be exciting to see if the techniques that have created such RNA polymerases are also able to evolve DNA polymerase ribozymes that have the potential to make self-replicating systems using DNA and not RNA as a source of genetic material. Such a system would bring us closer to understanding the transition from an RNA world to a type of life that respects the rules of the central dogma of modern biology.