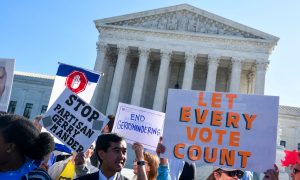 Under current law, redistricting presents a ripe opportunity for extreme political gerrymandering, especially in states where a single party controls the state legislature and the governorship. / Photo by Leigh Voge, Getty Images

Regardless of how the Supreme Court rules on two cases, anti-gerrymandering action at the state level is well underway.

Some time before June 25, the U.S. Supreme Court is expected to hand down rulings on two cases with momentous impacts on who controls power in state legislatures and the U.S. Congress. “These cases are likely to be the most important democracy cases in decades,” says Michael Li, senior counsel at the Brennan Center for Justice at New York University.

The cases test the constitutionality of partisan gerrymandering. They involve Wisconsin and Maryland, but the court’s decisions will have much broader effects. After the 2020 census, all states will redraw their electoral maps to account for population shifts within their states.

Under current law, redistricting presents a ripe opportunity for extreme political gerrymandering, especially in states where a single party controls the state legislature and the governorship. North Carolina, where Republicans control both houses of the state assembly and have a Republican governor, is a case in point: After the state was ordered to redraw its map in 2016 due to a racial gerrymander, David R. Lewis, Republican chair of the redistricting committee in the North Carolina House of Representatives, defended the committee’s blatant gerrymandering, saying it wasn’t against the law.

According to committee transcripts cited in a lawsuit, Lewis said, “We draw the maps to give a partisan advantage to 10 Republicans and three Democrats because I do not believe it’s possible to draw a map with 11 Republicans and two Democrats.”

A poll commissioned by the nonprofit Campaign Legal Center in 2017 found that voters of all major parties overwhelmingly want the Supreme Court to set rules to limit partisan gerrymandering.

Yet the Supreme Court appears to be divided on whether it should step in. Paul Smith, who argued the Wisconsin court case, Gill v. Whitford, before the Supreme Court, said the court is likely to split 5 to 4, with Justice Anthony Kennedy casting the deciding vote.

A thorny issue the court is considering is how to measure the level of gerrymandering that is sufficiently extreme to be considered unconstitutional.

The plaintiffs in both cases maintain that gerrymandering disenfranchises voters. In Wisconsin, after the 2010 census, Republicans employed experts to redraw the state’s map in a manner that Democrats say was aimed at maximizing the number of districts that would favor Republicans. It apparently worked: In the 2012 election, Democrats collectively won 53 percent of the votes in state assembly races, but only won 39 out of 99 seats.

After the 2016 elections, an analysis by the Associated Press found that Republicans won 22 more U.S. House seats than expected based on the average vote share across the country. Sam Wang, director of the Princeton Gerrymandering Project, told the AP that if partisan gerrymandering “goes unchecked, it’s going to be worse—no matter who’s in charge.”

Advances in data analytics have made it much easier to predict how people will vote, so the party making the maps can gain a level of political control that will be very hard to break.

The Supreme Court has been loath to step into what some view as the quagmire of partisan politics. Justice Roberts, during arguments in the Wisconsin case in October 2017, said that if the court recognized the Wisconsin claim, it would see a great many cases in which they would have to determine the outcome. Smith responded that if “we’re not going to have a judicial remedy for this problem, in 2020, you’re going to have a festival of copycat gerrymandering, the likes of which this country has never seen. And it may be that you can protect the court from seeming political, but the country is going to lose faith in democracy big time ….”

No matter how the court rules in these two cases, there will be plenty of continued action at the state level through the courts, the legislatures, and the ballot box. Corrective actions are already underway in eight states, four of which (North Carolina, Pennsylvania, Michigan, and Ohio) the Brennan Center considers to be among the most partisan district maps in the country.

In January, a federal court ordered the state to redraw its congressional district map because of its partisan gerrymander. Republicans appealed to the Supreme Court to stay the order until the court had ruled on the Wisconsin and Maryland cases. Once those rulings are handed down, the court will then have several options, Smith says: It may hear the North Carolina case, send it back to the federal court for reconsideration, or simply affirm the federal court’s decision, in which case North Carolina will have to redraw its map.

Pennsylvania: A new map is in place.

In January, the Supreme Court of Pennsylvania ruled the state’s electoral map was unconstitutional under the state constitution. Republicans appealed the case to the U.S. Supreme Court, which declined to overrule the decision. FiveThirtyEight predicts that Democrats will win one or two additional seats in Congress based on the new map.

The non-partisan group Voters Not Politicians collected about 400,000 signatures for a ballot measure that would create a 13-member citizens’ redistricting commission to draw the state’s political boundaries. As of May 24, the Board of State Canvassers has delayed certifying the measureafter a lawsuit was filed in the state Court of Appeals to prevent the measure from being placed on the ballot. The measure has drawn support from both Democrats and Republicans, but the Michigan Republican Party has criticized it.

On May 8, Ohio voters overwhelmingly approved a ballot measure that will require the legislature to attempt to create district maps with bipartisan support. Republicans currently reliably win 12 of the state’s 16 congressional seats with only around 50 percent of the statewide popular vote. Both state parties supported the measure.

In May, the Colorado state legislature voted unanimously to send two anti-gerrymandering measures for a November vote. The measures would amend the state’s constitution to prohibit gerrymandering and subject the electoral map to a review by an independent commission. The Associated Press’ analysis shows that the current Colorado map favors Democrats.

Utah: Measure will be on the November ballot.

Voters will have the chance in November to approve a measure proposed by the bipartisan group Utahns for Responsible Government that wouldcreate a nonpartisan commission to draw the states electoral map in 2021.

The CLEAN Missouri campaign has garnered almost double the number of signatures needed to put an initiative on the ballot in November. The measure would require the state electoral map to be drawn by an independent demographer and approved by a citizen commission. The initiative would also lower campaign contribution limits, eliminate lobbyist gifts, require politicians to wait two years before becoming lobbyists, and subject the Missouri General Assembly to open records laws.

A proposed measure would amend the state constitution to create an independent citizens’ redistricting commission. If proponents gather sufficient valid signatures by July 6, the measure will appear on the state’s November ballot.

State-level action can redress gerrymandering in individual states, but the forthcoming decision from the Supreme Court will affect the whole country. The Brennan Center’s Li says that the nation’s founders wanted state legislatures and Congress to reflect the composition of the people.

“Gerrymandering undermines that principle and renders elections irrelevant,” Li says. “If the Supreme Court sets a standard for partisan gerrymandering, this will be a rare affirmative win for the advocates of democracy.”