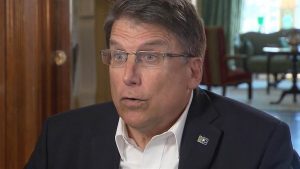 There are now reports that outgoing North Carolina Governor Pat McCrory has signed a bill which will severely limit the amount of power his Democratic successor will have once he takes office.

The Republicans hatched a bill called SB4 which is according to Progressive Policy Watch‘s Progressive Pulse:

“…A complex, four-part, 25-page document that was introduced late Wednesday during the General Assembly’s fourth special session of the year.”

And on Friday, Governor McCrory turned the bill into law with a stroke of his pen.

According to the Progressive Pulse, the new law:

“…A new, bipartisan agency: the Board of Elections and Ethics Enforcement that consolidates elections, campaign finance, lobbying, and ethics.”

It also devolves elections for the state Supreme Court and Court of Appeals into unnecessary partisan contests.

In case you were wondering if @PatMcCroryNC is going to sign stuff from special session, the answer is yes. And quickly. #ncpol #ncga https://t.co/B3YskPtxZK

McCrory has also made it clear that both he and the GOP-controlled legislature plan to push a lot more bills of SB4’s nature through the State Senate.

Meanwhile, disgruntled voters are paying about $42,000 per day for the GOP’s “special session.”

McCrory has ALREADY signed SB4. The chain of corruption goes all the way up to the Governor’s office. #NCGA

And what does the North Carolina State Republican Party have to say to the millions of North Carolina voters who are angered by this unprofessional behavior?

In so many words, they said, “Too damn bad.”

North Carolina citizens are planning acts of civilian disobedience, and Cooper’s attorneys are preparing for a very nasty political battle in court.