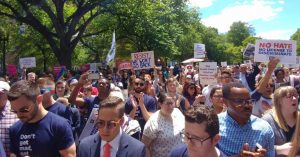 “By even considering this discriminatory order he has broken his promise to be a president for all Americans,” says Human Rights Campaign. (Photo: @HRC)

‘Nothing could be more un-American’ than order protecting those with a religious objection to same-sex marriage, transgender people, and reproductive rights.

Rights groups protested outside the White House on Wednesday ahead of an anticipated executive order from the Trump administration—one they say is nothing more than a “license to discriminate.”

Politico reported Tuesday that President Donald Trump “has invited conservative leaders to the White House on Thursday for what they expect will be the ceremonial signing of a long-awaited—and highly controversial—executive order on religious liberty.”

The order, whose signing Politico says “would represent a major triumph for Vice President Mike Pence,” is reportedly similar to a widely denounced, leaked draft that circulated earlier this year. As The Nation and the Center for Investigative Reporting revealed at the time, that order would:

“If this possible executive order is similar to February’s draft, it would do nothing except give a national license to discriminate, and endanger LGBTQ people and their families,” said Sarah Kate Ellis, president and CEO of the LGBTQ advocacy organization GLAAD. “President Trump is trying to create an America where my children could be turned away if a pediatrician doesn’t accept my wife and me. Nothing could be more un-American.”

GLAAD was one of many LGBTQ, women’s, and civil rights groups represented Wednesday at an emergency protest against the order. Elected officials also made appearances.

“This #LicenseToDiscriminate Exec Order will twist our Freedom Of Religion, and Freedom From Religion” @rea_carey pic.twitter.com/BBlFzykpwH

“If Trump signs this order, @NWLC will sue.” #LicenseToDiscriminate ✊🏾✊🏼✊🏻✊🏿 pic.twitter.com/oh63gfwadA

A number of organizations, including the American Civil Liberties Union (ACLU) and Lambda Legal, also vowed to pursue legal action if the order does in fact closely resemble the one leaked in February.

“The ACLU fights every day to defend religious freedom, but religious freedom does not mean the right to discriminate against or harm others,” said the group’s deputy legal director Louise Melling. “If President Trump signs an executive order that attempts to provide a license to discriminate against women or LGBT people, we will see him in court.”

If signed, the order would come in the same week that Sen. Jeff Merkley (D-Ore.), Rep. David Cicilline (D-R.I.), and more than 200 other members of Congress introduced the Equality Act, a federal bill to prohibit discrimination against LGBTQ people and women under the Civil Rights Act of 1964. As the Human Rights Campaign explained, the legislation “would finally guarantee explicit, permanent protections for LGBTQ people under our nation’s existing civil rights laws…in vital areas of life, like employment, access to public spaces, housing, credit, education, jury service, and federally-funded programs.”

Follow the opposition to Trump’s executive order under the hashtag #LicenseToDiscriminate: