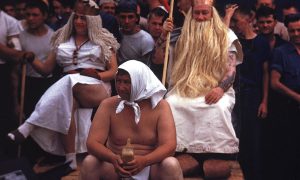 Sailors aboard the USS Lexington celebrate crossing the equator with an elaborate hazing ritual, 5 April 1944. Participants include Her Highness Amphitrite (seated left), King Neptune (seated right, with trident), and a Royal Baby, all characters who ‘preside’ over the initiation. / Photo by J R Eyerman, LIFE, Getty

In the autumn of 1900, Oscar Booz, a 17-year-old student at West Point military academy, was hazed by fellow cadets. Tabasco sauce was forced down his throat on three different occasions, and he was coerced into boxing a much larger student who savagely beat him. After the fight, he became ill, moved home and died.

The hazing became the subject of a national scandal when a congressional investigation into the death was launched. Ultimately, congress declared that West Point was not accountable for Booz’s death, but the committee was harsh in its assessment of the academy. Congressman Edmund Driggs issued a fiery denunciation: ‘[the hazing] was atrocious, base, detestable, disgraceful, dishonourable, disreputable, heinous, ignominious, ill-famed, nefarious, odious, outrageous, scandalous, shameful, shameless, villainous, and wicked’. It was a serious embarrassment for West Point, and senior military figures pledged to mercilessly stamp out the culture of hazing.

They failed. As recently as 2015, at least 30 freshmen cadets at West Point were injured during a mass ‘pillow fight’ brawl organised by their seniors. Rumours suggested that the injuries were due to some cadets concealing heavy objects in their pillowcases. Twenty-four cadets suffered concussions.

‘Hazing’ or ‘ragging’ refers to the ritualised abuse and humiliation of newcomers to a group, often through initiation challenges. The anthropologist Aldo Cimino at the University of California at Santa Barbara argues that the core features of hazing practices are that they are coercive; temporary and rarely repeated; unidirectional, in that it’s always newcomers being hazed by veterans; and they occur most commonly in long-term coalitions. Such practices are not restricted by class: they are found among privileged clubs at elite schools as well as the poorest street gangs. Nor are they constrained to any single culture. German fencing clubs, Japanese sumo stables and tribes in Papua New Guinea all practice intense hazing rituals. Perhaps what is most remarkable about hazing practices is just how popular and prevalent they remain, regardless of official efforts to prohibit and eradicate them.

In the US, for example, there are numerous anti-hazing programmes and charities. Hazing scandals are well-publicised in the media, and 44 out of 50 states have passed anti-hazing laws. Yet research on US students typically finds that around 10-20 per cent continue to report some experience with hazing and this grows closer to 50 per cent among those involved with sports clubs. To offer one illustration from my own research, in a survey of more than 700 practitioners of the martial art Brazilian jiu-jitsu, 53 per cent reported that ‘gauntlets’ that involved training partners whipping each others’ backs using untied belts were a part of their promotional activities.

Why do unpleasant hazing practices manage to remain so appealing that individuals are willing to risk legal punishment, injury and even death to keep the practices alive?

Cognitive dissonance is a theoretical concept introduced by the social psychologist Leon Festinger in 1962, which suggests that people have a compulsion to maintain harmony in their beliefs, attitudes and actions. The classic illustration of this effect is from a 1959 study by the psychologists Elliot Aronson and Judson Mills, which varied the severity of the embarrassment and discomfort involved with gaining access to a discussion group. The study had three conditions: severe, mild, and control. In the severe condition, participants were required to read to the experimenters 12 obscene words and two explicit sexual descriptions. In the mild condition, they read five sex-related words that were not as obscene. And finally, in the control group, there was no initiation requirement.

Afterwards, all participants listened to a tape-recorded conversation concerning the ‘psychology of sex’ that Aronson and Mills had designed to be ‘one of the most worthless and uninteresting discussions imaginable’. Participants were then asked to rate how much they liked the discussion and the other participants on a variety of scales. The results demonstrated that those who undertook the more severe initiations reported a much higher level of liking for both the content of the discussion and the other group. The researchers’ explanation for this was that participants in the severe condition had sought to reduce the dissonance induced by completing a painful task to gain nothing but access to a dull group by retrospectively enhancing their evaluation of the group and its members. Dissonance accounts thus help to explain why people maintain positive views of groups that haze them.

An alternative explanation, advocated by the cognitive anthropologist Harvey Whitehouse of the University of Oxford, is that enduring collective painful experiences creates a salient shared memory that serves as the basis for a kind of ‘social glue’, bonding members together. This account has also received some support from psychology experiments, as studies by Brock Bastian at the University of New South Wales in Australia and colleagues have recently demonstrated that individuals who experience painful events collectively (eg, eating hot peppers, submerging hands in ice water) display stronger bonds and greater generosity to fellow group members than those who perform comparable painless tasks.

From an evolutionary perspective, researchers have noted that enduring the physical or psychological effects of hazing could serve as a costly signal demonstrating an individual’s personal strengths, as well as the quality of the group that can motivate such acts. The anthropologists Richard Sosis and Eric Bressler (2003) of the University of Connecticut, for instance, analysedrecords of 19th-century religious settlements in the US, and found that religious communes with the costliest ritual requirements proved to be longer-lived than either secular communes or religious communes that had less costly requirements.

Drawing on such research, Cimino’s automatic accrual theory suggests that hazing provides an important solution to a recurring adaptive problem faced by our species during our evolutionary history: how to accurately assess the intentions and quality of new group members. Over time, coalitions are often able to amass substantial group resources, including properties and status. So the question becomes how can groups prevent exploitation of these resources from non-contributing free-riders?

The answer proposed by Aldo is that by dramatically increasing the costs of associating with the group, weak would-be members are kept out. Meanwhile, for those who are admitted to the group, the dominant position of veteran members is solidified. Aldo suggests that this evolutionary pressure has led humans to develop ‘psychological mechanisms that motivate the strategic devaluation of coalition newcomers’. He has also found some empirical support for this by conducting experiments that ask participants to design initiations for hypothetical groups with different resources and status. Invariably, for the groups with higher status and more resources, more severe initiations are constructed.

Hazing practices have a deep history and cross-cultural universality, which is why they endure and will likely never be eradicated completely. Nevertheless, it is incumbent upon modern sports teams, university frats and the like to avoid falling prey to some naturalistic fallacy that hazing is good. Rather they should seek to combat hazing and its dangerous consequences. After all, the benefits of hazing can be found in far less harmful practices, including euphoric celebrations. If only that had been a way for Oscar Booz to gain entry into the West Point group he so esteemed.