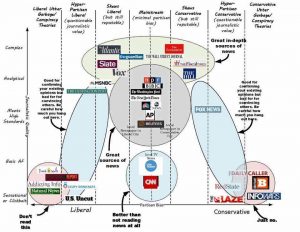 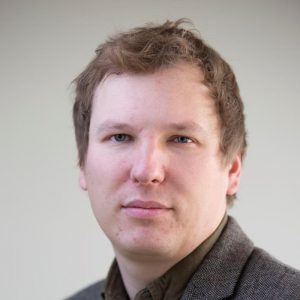 We now have some preliminary evidence to suggest that polarisation is increasing in some countries, but also that there is large national variation in the degree to which the audiences for the most popular news brands are polarised along the left–right spectrum.  In this section we will take a more in-depth look at news media polarisation. We will explain how our measures are computed, before exploring some of the differences we see across countries.

In many countries, people often have an intuitive sense of what the audiences of some news brands will look like. People who use certain brands are often assumed to be of a particular age or gender, or with a certain level of interest in the news. Sometimes we can detect differences along political lines. For example, when we look at the audiences for some news brands we see that some have far more people who self-identify with the political left than the right, or vice versa. Others have a more even split, or a higher number of people from the centre.

In the UK, the audience for the Guardian is made up of far more people on the left than on the right, but the opposite is true of the Mail Online. Sky News online has around 20% from both camps. In the USA, we can similarly see that the online audience for the New York Times is left-leaning, but that for Fox News online is right-leaning. Yahoo, which aggregates news from a number of different sources as well as authoring its own content, is evenly split.

We can use the information about the political leaning of news audiences to generate a score for each brand. The score tells us how right-leaning or left-leaning audiences are when compared to the political views of the population as a whole. We can then map each of the most popular 15 brands within a market based on the extent to which they diverge from the centre (as defined by the population).

On the next chart – which maps the most popular online news brands in the UK – we can see that the Guardian online, with its left-leaning audience, has a score which places it on the left-hand side, whereas the Mail Online is placed on the right. The size of the bubbles represents the weekly reach of the brand. With its weekly online news reach of 47%, BBC News online is the largest bubble on the map. It is close to the centre as defined by the average political leaning of the population as a whole, measured on a seven-point scale ranging from ‘very left wing’ to ‘very right wing’.

Q1F. Some people talk about ‘left’, ‘right’ and ‘centre’ to describe parties and politicians. With this in mind, where would you place yourself on the following scale? Q5b. Which of the following brands have you used to access news **online** in the last week? Please select all that apply. Base: Total sample: UK = 2112. Note: Respondents who answered don’t know to Q1F were excluded.

We see a different pattern in the USA. Here, we can see at a glance that the furthest left and furthest right bubbles are further apart, which is one possible indication of polarisation. We can also see that all but two of the top 15 outlets have a left-leaning audience, with the audience for Fox much more right-leaning than any of the other leading brands.

Q1F. Some people talk about ‘left’, ‘right’ and ‘centre’ to describe parties and politicians. With this in mind, where would you place yourself on the following scale? Q5b. Which of the following brands have you used to access news **online** in the last week? Please select all that apply. Base: Total sample: USA = 2269. Note: Respondents who answered don’t know to Q1F were excluded. uestions and methodology for this and subsequent audience maps the same using total sample in each country.

When we look at other countries we see a great diversity of patterns. Some, like in Netherlands, are more tightly clustered around the centre. The Nordic countries, in common with the UK, also tend to have a large bubble in the middle; often the public service broadcaster. Importantly, to make them comparable, the bubbles are positioned in terms of the level of dispersion we see in political leaning amongst the population as a whole. This means that in countries like Germany and the Netherlands news brands are not simply more centralised because the population happens to be centralised, and in the USA, news brands are not more polarised because the population is more polarised.

Other countries, like Spain and Italy, are more spread out. But even looking at these two countries, we notice differences. Spain is widely dispersed, with the most heavily skewed audiences also those with the smallest reach. But in Italy, two of the most widely used brands – La Repubblica online and TgCom24 online – also have audiences that are either dominated by left-leaning or right-leaning users. Having popular brands with heavily skewed audiences might also be a possible indication of a polarised media environment.

We can use these data to produce comparable polarisation scores for each country. The scores take into account the level of dispersion of the bubbles, and weights this by their reach. If outlets with a larger reach are far from the centre, then this will produce a higher polarisation score than if they were in the middle.1 The next chart displays the polarisation scores for those countries where the left–right distinction is meaningful; our European countries, Australia, and the USA. In other countries, the left–right distinction is less important than other divisions. (Turkey, for example, is politically polarised between adherents of Islamism and supporters of Kemalism.)

On this basis we estimate that polarisation amongst the most popular online news brands is highest in the USA. Italy, Spain, and Poland are next. Nordic and Western European countries such as Finland, Norway, Germany, and the Netherlands exhibit lower degrees of polarisation. Very broadly, this maps onto the typology of media systems identified by comparative media researchers, where Southern and Central European countries are more polarised, and Western European and Nordic countries less so.

It is likely that many different factors drive news polarisation online. In some countries, history and path dependence have created a situation whereby patterns associated with legacy media are transferred online. But there are also reasons to expect online patterns to be different because of the greater range of opinion and the way content is accessed. Digital-born brands are already reshaping the news ecosystem. Some of these, such as Breitbart, Occupy Democrats, and the Canary, focus on political news and are highly partisan. Though still quite small (no more than 7% weekly reach in our survey) and usually limited to one market, comScore data reveal that they have been growing quite rapidly in the UK and the USA since 2014. Their rise is already likely to have contributed to the sense that media polarisation has increased in these countries, and if their growth continues, this will come to be reflected in our measures.