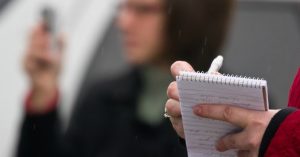 Leaked document shows the FBI does not have to jump through a lot of hoops to get access to journalists’ call data. (Photo: Roger H. Goun/flickr/cc)

The other major question here is: why are these rules secret in the first place?’

Newly leaked documents published by The Intercept expose just how easy it is for the FBI to spy on journalists using so-called National Security Letters (NSLs).

The classified rules, which had previously been released only in heavily redacted form, “show that the FBI imposes few constraints on itself when it bypasses the requirement to go to court and obtain subpoenas or search warrants before accessing journalists’ information,” The Intercept‘s Cora Currier wrote on Thursday.

According to the reporting, an attempt to access journalists’ call data with an NSL must be approved by the typical chain-of-command as well as the FBI’s general counsel and the executive assistant director of the agency’s National Security Branch.

“Generally speaking, there are a variety of FBI officials, including the agents in charge of field offices, who can sign off that an NSL is ‘relevant’ to a national security investigation,” Currier explained.

Trevor Timm of the Freedom of the Press Foundation, an advocacy group which had petitioned for the release of these documents, calls Thursday’s revelations “quite disturbing, since the Justice Department spent two years trying to convince the public that it updated its ‘Media Guidelines’ to create a very high and restrictive bar for when and how they could spy on journalists using regular subpoenas and court orders. These leaked rules prove that the FBI and [Department of Justice or DOJ] can completely circumvent the Media Guidelines and just use an NSL in total secrecy.”

The Intercept added: “There is an extra step under the rules if the NSL targets a journalist in order ‘to identify confidential news media sources.’ In that case, the general counsel and the executive assistant director must first consult with the assistant attorney general for the Justice Department’s National Security Division.”

Of this low additional hurdle, Timm scoffs: “That’s it! They don’t have to even go through the motions for following any of the several rules laid out in the DOJ [M]edia [G]uidelines: like get the Attorney General to sign off, exhaust all other means of investigation, alerting and negotiating with the affected media organization, making sure what is being sought is essential to the investigation, etc.”

Furthermore, the rules stipulate that if “the NSL is trying to identify a leaker by targeting the records of the potential source, and not the journalist, the Justice Department doesn’t need to be involved.”

And then there’s the matter of transparency, Timm writes, comparing the information gleaned through the leak with what was previously made available by the DOJ:

The other major question here is: why are these rules secret in the first place? The information that has been redacted here by the Justice Department—and which they are fighting to keep secret in court—is incredibly mundane. The fact that the FBI has to get another person in the bureaucracy to sign off on a particular investigation should not be a state secret, nor would it remotely harm any ongoing investigation, nor would “tip off” any alleged criminals to how to evade surveillance.

In an effort to make the rules more transparent, the Freedom of the Press Foundation in 2015 filed a Freedom of Information Act (FOIA) lawsuit demanding the DOJ release the secret rules targeting journalists. Last month, a coalition of 37 news organizations—including the Associated Press, NPR, and Buzzfeed—filed a legal brief supporting that demand.

Just last week, the U.S. Senate failed to pass a bill that would have dramatically expanded the FBI’s authority to use NSLs to obtain Electronic Communication Transaction Records (ECTR) such as email time stamps, senders, and recipients, as well as browsing metadata such as history and location—all without a warrant.

However, digital rights group Electronic Frontier Foundation warned at the time, Senate Majority Leader Mitch McConnell “switched his vote to ‘No’ at the last minute so that he may be able to bring up the amendment during future debate.”