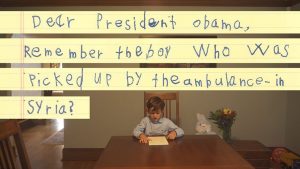 The humanity that a young child can display, who hasn’t learned to be cynical, or suspicious, or fearful of other people because of where they’re from, or how they look, or how they pray, and who just understands the notion of treating somebody that is like him with compassion, with kindness — we can all learn from Alex.” ~ President Obama

As reported by the UN High Commissioner for Refugees, the world is facing the largest displacement crisis on record. Sixty-five million people have been forced to flee their homes by violence, persecution, and instability. Many countries have given them sanctuary and assistance, so that families have shelter, medical care, and basic services, and children can go back to school and parents can go back to work. But the need remains great. And helping refugees isn’t just up to governments—every American can play a role, too.

This past week, at the United Nations in New York City, President Obama hosted the Leaders’ Summit on Refugees.

The Summit brought together the leaders of member states that will hopefully step up to make new, significant commitments to:

• Admit additional refugees through resettlement or other legal pathways; and

You can watch the President’s address to the “leaders” at the bottom. It is long — 19 minutes.

Towards the end of his address, the President reads from a poignant letter he received from a six-year-old boy “who wanted to do his part to help a refugee in need.”

We were all shocked and heartbroken by the photo of a young Syrian boy, Omran, sitting in an ambulance after an air strike on Aleppo, covered in blood and dust. Omran, became an iconic image of the horrors that go on daily, unabatedly, in Syria.

Most of us read and saw the tragedy, some of us shed a tear. Alex, who lives just outside of New York City with his mom, dad, and little sister Catherine decided to do something about it, sat down at his kitchen table and wrote President Obama a letter (below).

Whether you watch the President’s address or not, whether you believe that we should admit refugees into our country or not, please watch the video below.

Perhaps Alex will change some minds.