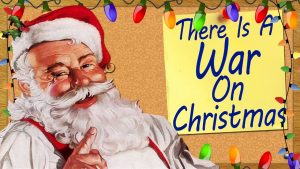 It’s that time of year, and the festive annual tradition of Religious Right hand-wringing about a supposed “War on Christmas” is getting underway.

This week Liberty Counsel launched its annual “Friend or Foe Christmas Campaign” and released this year’s “Naughty and Nice” list of retailers that the group judges on the nature of their holiday promotions.

In an old video Liberty Counsel retweeted on Tuesday, Liberty Counsel President Mat Staver decried “attempts to remove Christ from Christmas” and warned that “every year the battle intensifies.” The Religious Right’s “War on Christmas” narrative, amplified by right-wing media personalities on Fox and elsewhere, has been part of the attempt to boost conservative evangelicals’ political engagement by convincing them that they are under assault in American culture.

On Monday, Liberty Counsel sent out a press release with a link to this year’s Naughty and Nice list, which, while ridiculous, is revealing about the kind of country Liberty Counsel wants America to be—one in which the cultural hegemony of its brand of Christianity is upheld and enforced, even by secular institutions like Burlington Coat Factory.

Companies can make it onto Liberty Counsel’s “naughty” list even if they are selling Christmas-themed products, or advertising with universally recognized symbols of Christmas traditions like Santa Claus and reindeer.

For example, Liberty Counsel notes that Lord and Taylor incorporates Christmas language in its products and marketing. “However,” Liberty Counsel complains, “the company, like many others, falls short of portraying what the Christmas season is about. Their reindeers and printed Santas hide the love of the Nativity and reason for gift giving.”

Similarly, Liberty Counsel criticizes Burlington Coat Factory for its “severe lack of Christmas advertising with biblical meaning.” Liberty Counsel complains, “Each ad or marketing concept starts strong with Christmas-themed products but loses meaning through emphasis on giving and receiving.” We’re explicitly talking about retail advertising; why wouldn’t their emphasis be on giving and receiving?

Then there’s Dick’s Sporting Goods. “This sports store ignores the most important Gift of Christmas,” says Liberty Counsel, urging people to contact the retailer “to encourage the organization to include Christ in their ‘Christmas’ seasonal marketing plan.” Is it really the job of a sporting goods store to promote Christian teachings about the birth of Jesus?

The War on Christmas narrative has taken such strong root in the conservative evangelical imagination that then-candidate Donald Trump latched onto it as a way to convince evangelicals that he was in their camp, as he did in these memorable remarks from the 2015 Values Voter Summit:

After Trump’s election victory, his supporters kept it up, acting as if Christmas had been abolished during the Obama administration and that the sound of Christmas carols could once again grace the shopping malls of America thanks to Trump’s victory. After the election, campaign adviser Corey Lewandowski said that Americans would have “a great Christmas, which you can say again, ‘Merry Christmas,’ because Donald Trump is now the president, you can say it again, it’s okay to say, it’s not a pejorative word anymore.”

Last year, televangelist Jim Bakker declared that Christmas had been “outlawed” a few years ago:

Alveda King, a Trump booster, said last year that “one of the first things he made sure we could do was say Merry Christmas again.” And earlier this year, Ralph Reed took it even further: “From the onset, President Trump promised to make America say ‘Merry Christmas’ again—and fight back against anti-Christian bigotry.”

One of the most egregious things about the whole “War on Christmas” narrative is that it is utterly dismissive of other gift-giving religious holidays that take place during the winter season, including Hanukkah and Diwali. Rather than viewing “Happy Holidays” as an inclusive and respectful way to mark the celebratory nature of the season in a pluralistic society, Religious Right activists act as if “Happy Holidays” is an aggressive attack on their right to force everyone to recognize the primacy of the Christian holiday.

Originally published by Right Wing Watch, a project of People for the American Way, a program of Open Society Foundations, under the terms of a Creative Commons Attribution-NonCommercial-NoDerivs 3.0 Unported license.