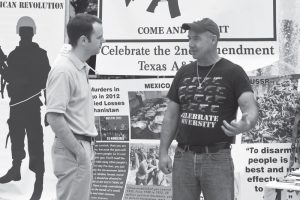 Preston Wiginton, right, during a celebration of Second Amendment Day he organized on the Texas A&M University campus in 2013. Courtesy The Battalion

The man bringing Richard Spencer to speak at Texas A&M University next week is himself a white nationalist who has been inviting incendiary guests to College Station for years.

Preston Wiginton has been trying for years to get students and faculty to come to his events on the Texas A&M University campus — with little luck.

Take, for instance, the 2015 lecture titled “American Liberalism Must Be Destroyed” by Alexander Dugin, a far-right-wing political scientist with ties to powerful leaders in the Russian government. Since the U.S. Department of Treasury has banned Dugin from entering the country, Wiginton arranged for him to give a speech via Skype in hopes that Dugin would draw an audience of government professors. Only 17 people showed up. None were professors.

“There are so many topics today that people just don’t want to talk about because it is not politically correct,” Wiginton said.

That has been life for Wiginton, a 51-year-old old former shipping pallet manufacturer who attended A&M as an undergraduate while in his 40s. Against administrators’ wishes over the past decade, he has tried to spread his incendiary brand of white nationalism at his former school. Some of his events have featured the editor of a white supremacist magazine; the leader of a far-right British political party; and the producer of a documentary that asks, “Is racism even real?” according to its Amazon product description.

Usually, attendance is disappointing for a man who gets a much friendlier reception among skinheads in Russia.

But lately, following Donald Trump’s election, Wiginton has been energized. Next week, he is bringing to campus the white nationalist Richard Spencer, who recently generated viral attention and fear when his Nazi-like homages to the president-elect at a conference in Washington — “Hail Trump, hail our people, hail victory!” — were caught on video.

Wiginton’s planned event has already made national news. Many Aggies are enraged, and space issues and security concerns have led A&M staff to move Spencer’s speech to a larger space. But the attention has generated the kind of buzz that Wiginton has sought for more than a decade.

“Hopefully, this event will give me enough exposure that people will say, ‘This guy knows what he is talking about,’” Wiginton said.

Meanwhile, many on the A&M campus are left feeling hopeless. Administrators have said they find Wiginton’s and Spencer’s views repulsive. But under the First Amendment, they say, they have to let the speech go on.

“There’s concern that the great name of Texas A&M is getting smeared through the mud because Preston Wiginton is renting a room on campus,” said Rabbi Matt Rosenberg, who oversees the Jewish student center near campus.

A&M is a relatively conservative school in a conservative part of Texas. But Wiginton — a burly, bald-headed man with a calm, friendly voice — hasn’t picked the university because of its politics. Rather, he has focused on A&M as a matter of convenience. He lived in College Station for about a decade.

In a rushed telephone interview this week, he declined to discuss his personal life. (“The left will do anything to destroy a person,” he said.) But some details of his background are public. The Southern Poverty Law Center, which tracks hate groups in America, says he is the former owner of a shipping pallet manufacturing company. Records indicate that he registered the Victoria Pallet Company with the state in the early 2000s, though its registration has since expired.

He surfaced as a white nationalist and as a fiery presence at A&M almost simultaneously in 2005. That fall, he appeared at Hammerfest, a neo-Nazi gathering in Georgia. A weightlifting enthusiast, he won the “Strongest Skinhead” award at the festival, according to the SPLC.

A few weeks later, he hosted what appears to be his first event — an anti-immigration forum — on the A&M campus. According to the SPLC, he arranged for A&M’s Young Conservatives of Texas branch to sponsor the event, telling them that he was organizing it on behalf of the organization’s state leaders. When that turned out to be untrue, the conservative student group dropped out, according to the SPLC.

Then in 2006, he enrolled in A&M as a 41-year-old undergraduate. His plan, he says, was to study government and walk on to the football team. At the time, he claims, he could bench press nearly 500 pounds and run the 40-yard-dash in 4.7 seconds. He never had a chance to make the team, however, due to a technicality that made him ineligible, he said.

A year later, he dropped out and traveled to Russia. According to the SPLC, he moved into an apartment subleased from KKK leader David Duke and built relationships with Russian skinheads and right-wing leaders. While there, he gained international attention when he spoke at an anti-immigrant march in Moscow, waving a black cowboy hat to the crowd.

“I’m taking my hat off as a sign of respect for your strong identity in ethnicity, nation and race,” he said, according to an Associated Press article at the time. He later said “Glory to Russia,” while the crowd chanted “white power!” and raised their hands in Nazi-style salutes.

In 2008, he was described as a “key white power activist in Russia and the U.S.” by the SPLC. The next year, he tried to attend a rally in central England organized by the far-right British National Party but was turned away at Heathrow Airport in London. The British government said at the time that he was denied entry due to fears that he would stoke racial tension in England. (Wiginton had brought the leader of the BNP to A&M to speak in 2007.)

Spencer, Wiginton’s next invitee, is known as the creator of the term “alt-right,” which is used to describe a growing white nationalist community online. He had already agreed to come when the video of his speech in Washington D.C. was publicized. It showed him denigrating Jews and describing the media as “Lügenpresse,” a German term meaning “lying press” that was used by the Nazis. He later defended the Nazi salutes by saying they were done in a “state of irony and exuberance.”

Wiginton wasn’t deterred by the display, and in an interview echoed many of the white nationalist views of Spencer.

He said he’s worried that white culture in America is being threatened by mass immigration. But he says he is more concerned about preserving all the world’s races.

“As a nationalist, I would fight just as much for a unique tribe in the Indian Ocean to persevere who they are as I would my own,” he said.

He later added that he believed the “cornucopia of diversity that nature created” is “a beautiful and wonderful thing.”

But in other settings, Wiginton has advocated for violence against other races, according to the SPLC. That included posting on an online forum that beating a person of color “when they poisen (sic) one of our own” is a “righteous act of collective preservation.”

“It’s funny how they take three comments out of a person’s whole life and try to ruin a person’s life about it,” Wiginton said. “I think people are scared because it is a point of view they have never heard.”

Wiginton has hosted or participated in at least 10 events on the A&M campus. Many of the speakers he has invited have expressed similar views, though he has also hosted an event about human trafficking and a protest in favor of gun rights. Some generated little attention. Others drew condemnation from the A&M administration.

A&M has allowed each of those events to go on, while trying not to draw much attention to them. Wiginton’s events happen in on-campus rooms that he rents. Because A&M offers such rooms to the public, the state school can’t deny them to him because it finds his statements reprehensible. He has hosted similar events at other universities, including the University of Houston and Michigan State University.

Next week’s event, however, has stirred up controversy that the university couldn’t ignore. Many students and alumni called on A&M to cancel the speech. Instead, the university is hosting a counter event called “Aggies United” at its football stadium at the same time.

“I find the views of the organizer — and the speaker he is apparently sponsoring — abhorrent and profoundly antithetical to everything I believe,” University President Michael Young said in a letter to the campus community on Tuesday. “In my judgment, those views simply have no place in civilized dialogue and conversation.”

But, Young added, “we have no plans to prohibit the speaker from using the room he has rented. Freedom of speech is a First Amendment right and a core value of this university, no matter how odious the views may be.”

When asked about being denounced as racist, Wiginton said he didn’t understand the term. He compared white people in America to the Cherokees as the United States pushed westward. Their way of life was threatened, he said, and they fought that threat to the end.