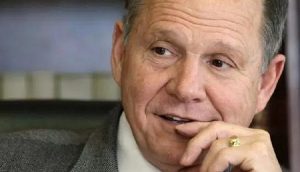 Earlier this week, we looked into the campaign funding behind Roy Moore, the suspended Alabama chief justice who is now the frontrunner for his state’s open U.S. Senate seat, and discovered a host of far-right Christian nationalist activists who see Moore as their best hope for enacting their theocratic vision on a national stage.

Today we noticed that Moore had posted a lengthy list of endorsers on his campaign website—and it appears that no activist is too extreme for Moore to boast of his connections with.

Where to begin? How about with Matt Trewhella, who Moore’s campaign lists on its endorsements page as “Author of ‘The Doctrine of the Lesser Magistrate.’”

Trewhella has long been an activist on the far fringes of the anti-choice movement. In the early 1990s, he was one of 34 anti-abortion extremists to sign a statement declaring that the murder of abortion providers is “justifiable.” Another signer of the statement, Paul Hill, went on to murder an abortion provider and the provider’s bodyguard. Around that time, Trewhella was videotaped calling for churches to arm children in order to form militias.

These days, Trewhella works with the radical abortion protest group Operation Save America—a key ally of Moore’s—to promote his “Doctrine of the Lesser Magistrate” book in which he argues that government officials have a duty to defy federal law and court decisions on issues like abortion and gay rights. In 2013, Trewhella declared that homosexuality “needs to be suppressed through the force of law.” Speaking at OSA’s national event in Louisville earlier this year, Trewhella expressed frustration that elected officials are unwilling to prosecute women who have abortions for homicide:

Also on Moore’s list of endorsers are other extreme anti-choice activists affiliated with OSA, including Patrick and Elizabeth Johnston. Elizabeth Johnston, a.k.a. “Activist Mommy,” achieved notoriety in July when she posted a video of herself burning copies of Teen Vogue; while attending OSA’s national event in Wichita last year, Johnston protested in front of the home church of a prominent pro-LGBTQ rights Christian. Moore also boasts of the endorsement of Jason Storms, Trewhella’s son-in-law and the current head of Personhood USA, who like Trewhella has said that a woman who has an abortion is “guilty as a murderer in the eyes of the law.”

Moore’s list also includes Troy Newman, president of OSA’s rival group Operation Rescue, who has written that the government has a biblical duty to try abortion providers for capital crimes.

Moore also boasts of the endorsement of Michael Peroutka, a longtime ally and funder of his, who is still a generous campaign donor. Peroutka was an active member of the neo-Confederate group League of the South until his own campaign for local political office forced him to leave the organization. Here’s Peroutka at the group’s 2012 conference talking about secession and leading the room in a rendition of “Dixie,” which he calls “the national anthem”:

Alongside his nostalgia for the Confederacy, Peroutka promotes an extreme view of Christian nationalism that holds that laws that do not comport with a certain reading of the Bible are null and void: He said that Maryland’s general assembly ceased to be a “valid legislative body” after it violated “God’s law” by passing bills such as one ensuring marriage equality.

Also on Moore’s list of endorsers is David Whitney, Peroutka’s pastor and colleague at the Institute on the Constitution. Whitney has also been an active member of the League of the South, and has implored “Christians who have a biblical understanding of law and government” to “take every position of leadership in our country at every level.”