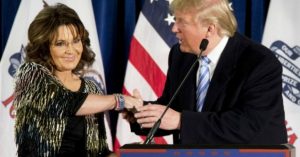 Rumors that former Alaska Governor Sarah Palin could be the next ambassador to Canada have been met with a resounding “No Siree,” as Canadians this week have erupted in a chorus of (hilarious) outrage.

The backlash erupted after White House press secretary Sean Spicer on Wednesday refused to rule out the appointment when questioned directly.

“We have no additional ambassador nominations or announcements to make on that front,” Spicer told reporters. “I’m sure at some point we will have, soon.” Canadian Prime Minister Justice Trudeau is expected to meet with U.S. Donald Trump on Monday.

Several Canadian lawmakers swiftly responded with their own thoughts on the reports.

“Well that would show how little Steve Bannon and his pal @realDonaldTrump think of Canada,” Member of Parliament (MP) Charlie Angus wrote on social media. Fellow New Democrat Nathan Cullen said Palin’s appointment would be “tantamount to having to deal with two Donald Trumps,” according to CBC News.

“She has never been very comfortable with the truth,” Cullen told reporters on Thursday. “Couldn’t recognize it most mornings if it jumped up and knocked her on the head.”

In a searing op-ed, Ottawa Citizen columnist Andrew Cohen argued that the appointment would not be out of the realm of possibility for Trump and warned that if appointed, the former vice presidential candidate and reality TV star “would bring her traveling carnival to Canada.”

“If the Captain of Chaos wants to disrupt everything—including resetting relations with little ol’ Canada—Palin would be the one to break the china,” Cohen wrote. Palin, he continued, “represents the descent of politics. We see today a direct line from Palin to Trump. Politically, Trump is Palin’s child.”

Should she be appointed, Cohen concluded, she would remind Canada, “lest we forget, of our new life through the looking glass.”

As the rumors percolated, other neighbors to the north took to Twitter to voice their opposition and to revel in the morose comedy of it all.

Sarah Palin may be appointed ambassador to Canada, narrowly beating out a rock, a piece of paper and a pair of scissors.

Dear Mr. Trump: Rather than appoint Sarah Palin as ambassador to Canada, please bomb us. Signed, all intelligent life in Canada. #killmenow

Sarah Palin ambassador to Canada? Our 2 official languages are French and English. She will have to learn at least one #canpoli pic.twitter.com/G0UwKkNDsU

Sarah Palin is being considered for job as ambassador to Canada. She’s presently on a flight to Europe to meet with us. #sarahpalin

No Sarah Palin, that’s Mexico. Canada’s in the other direction.#sarahpalin #trump pic.twitter.com/eFybxJ8UyB

Notably, there is growing concern among Canadians over Trump’s so-called “America First” strategy. A new survey found that the majority of citizens want Trudeau to stand up for the nation’s economic interests during upcoming trade negotiations and 58 percent “would support a trade war with the U.S. if the Trump administration slapped new tariffs on Canadian exports,” the Globe and Mail reported Thursday.

At the same time, there has been growing pressure on Trudeau and other Canadian lawmakers to counter Trump’s travel ban by lifting its cap on refugee resettlement.