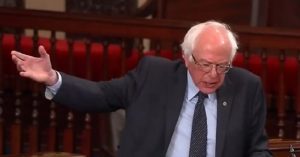 Senate Republicans on Tuesday blocked a Bernie Sanders-backed amendment aimed at lowering prescription drug prices and allowing for the import of low-cost medicines from other countries.

Sanders (I-Vt.) sought to attach the proposal to the controversial 21st Century Cures Act, which is ostensibly geared toward fueling medical innovation. Both Sanders and Sen. Elizabeth Warren (D-Mass.) have decried the legislation, poised to pass the Senate on Wednesday, as a Big Pharma giveaway.

In a statement, Sanders described his amendment as a “Trump proposal,” noting that the president-elect advocated for its major components on the campaign trail.

The senator from Vermont said:

During his run for the White House, Trump called for requiring Medicare to negotiate with drug companies to lower prices. In a speech in New Hampshire last Feb. 7, Trump criticized current U.S. law that forbids Medicare from negotiating prices with pharmaceutical companies. Trump said: “We are not allowed to negotiate drug prices. Can you believe it? We pay about $300 billion more than we are supposed to, than if we negotiated the price. So there’s $300 billion on day one we solve.”

As such, he declared on the Senate floor Tuesday, “I am quite confident that all of my Republican colleagues will support an amendment in my hands that will do exactly what Trump said he would accomplish as president.”

However, The Hill reported:

“The sure way for this bill not to pass in this Congress is to do something that changes the subject,” he said.

In turn, Sanders said he could not support the legislation.

The House approved the bill last week; it is expected to pass the Senate easily on Wednesday and be signed by President Barack Obama shortly thereafter.