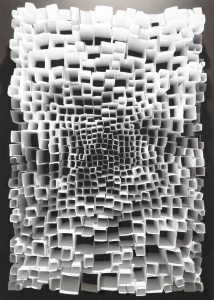 Why these six artists fold, cut, layer and shape paper in different ways as part of their photographic practice. 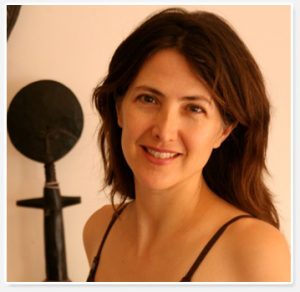 Within a world of digital photography, the artists in the exhibition Cut! Paper Play in Contemporary Photography have turned to paper as a source of inspiration. All appreciate the physicality of paper, and each brings his or her own sense of wonder, precision, and playfulness to its transformation into something more complex.

In these brief slices of conversation, excerpted from interviews I conducted for the audio tour that accompanies the exhibition, they share what they love about working with paper.

Laura Hubber: How do you want your photographs to be received by the viewer?

Christiane Feser: When I was still shooting flat, normal photographs, I was always kind of disappointed when I saw how fast people were looking at these works. They look at them and after a few seconds they decide, “Okay, it’s a house, it’s a street,” next picture.

But if you really look closely at something, you get lost in the picture. It is important that people are a little bit like detectives, trying to find out, “What is the thing? What is the representation?” and this is very satisfying for me to see. But I am most happy if they can’t find out in the end all the secrets that are in this. 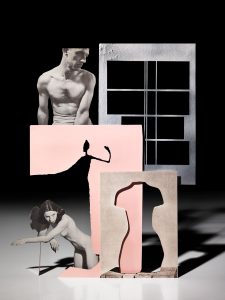 Matt Lipps began cutting out photographs from Vogue and Harper’s Bazaar and pasting them onto cardboard when he was in high school.

Laura Hubber: Why do you love paper?

Matt Lipps: It doesn’t go away. You can always keep it and hold on to it. Digital pictures get deleted and they are just gone. They go back into the World Wide Web, wherever they go. There is something about that piece of paper that you can rely on, that will be with you, that you need to take care of. Especially if you think about an actual photograph, which has a surface that will expand and contract with heat and moisture, and needs to be protected from light. You need to care for it, like a body almost. The nurturing of that sort of appeals to me.

Paper also crumbles, is torn. I like the wear and tear and wrinkles that happen at the corners of the cutouts when they fall over and get bent. I appreciate the history that is embedded in that object. I’m left cold with a digital image.

Thomas Demand is a sculptor who makes large models of cardboard and paper and then photographs them. After he takes the photograph, he discards the model itself.

Thomas Demand: I decided at some point that I wanted to be able to make sculpture[s], but not live with them. A cheap material, which wouldn’t bind me financially and space-wise, is paper and cardboard, which is also quite good because everybody knows it very well. The cup of coffee, the dollar note, maybe the newspaper. People have a feeling for paper. 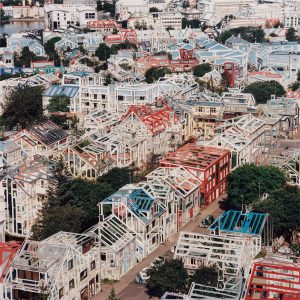 Soo Kim’s photographs are an exercise of subtraction. She layers two photographs she has made, and takes away volume with a knife to create a more subjective portrait of what she has photographed.

Soo Kim: When I make a piece like the Reykjavik series, it’s showing me a picture of Reykjavik, but I’m subtracting parts of the picture plane away in order to make a depiction of Reykjavik that I’m interested in seeing.

My practice comes from collage; it’s just a subtractive method rather than an additive method. It’s something that the viewer doesn’t see, but in a way, is just as meaningful and important to the photograph itself as what remains intact. 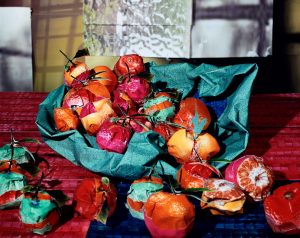 Artist Daniel Gordon makes still lifes from photographs he’s printed on his inkjet printer and crumpled into balls and other shapes.

Daniel Gordon: I was interested in making a hybrid digital/analog image based on a traditional still life. The clementines are made of crumpled up pieces of paper with photographs of clementines glued on top of balls. The materials that I’m using to make these photographs are glue, paper and scissors.

I’m interested in inkjet printing, and the mistakes a printer could make when one color is jammed, and I get streaky lines, or there’s an ink splotch, or certain technical issues come up. I try to embrace those imperfections as a way to signal the tools that I’m using. 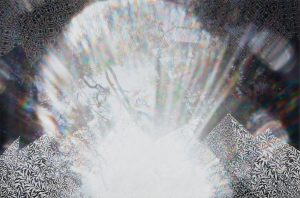 Christopher Russell often cuts into his photographs. Sometimes, he uses a meat cleaver to hack at an image; in Explosion, he uses a razor blade to delicately carve into the surface of the photographic paper.

Christopher Russell: I think beauty is a lure. I’m interested in subversion and if you can sort of infiltrate, find a way into somebody’s space, then they’re more likely to understand what you have to say. So, I think beauty is sort of the hook that gets people in to think more about other issues in the work.

Laura Hubber: What’s your relationship between paper and the photographic process?

Christopher Russell: I mean, if we’re doing it SAT style, “Paper is to photo what spirituality is to daily life.” I mean, you’re releasing this bright white from within. It’s like ghost pictures of the visions of Mary with the glowing heart. That’s kind of what paper is to me.