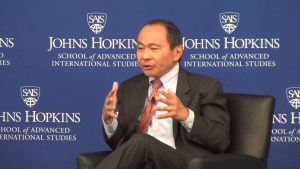 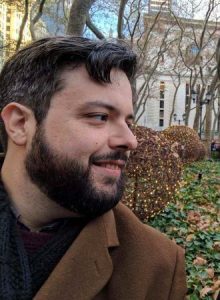 All ages are important in their own way, but it seems like our current one is somehow more vital. The status quo is crumbling, and there is a profound doubt that the course of history will continue in any predictable manner. We scan headlines like scryers divinating, anxiously parsing who Robert Mueller has indicted or what motions have been filed by Stormy Daniels’s lawyers. And as unlikely (but welcome) as the meager hope generated by a former FBI director and a porn star might be, the desire for tidy finality evidences an ultimately erroneous belief that we can somehow return to the way things have always been – but the Rubicon was passed long ago.

Despite nervously hoping that ours is a nightmarish interregnum, we simultaneously know that we’re in a different country now, a different world. Nobody in 2018 would embrace a comfortable bromide like historian Francis Fukuyama’s myopic declaration that we had all reached the “end of history.” Fukuyama writing in 1989 and basking in the afterglow of the Berlin Wall’s ruins, claimed that we were witness to the very “end of history as such: that is, the end point of mankind’s ideological evolution and the universalization of western liberal democracy as the final form of human government.” Fukuyama’s obituary to history was, to put it lightly, premature.

Fukuyama’s paean to western liberal democracy and free markets is a variety of secularized millennialism – which incidentally wasn’t what was fallacious about it. Theologically, “millennium” refers to belief in a future period of perfection, with a number of positions enumerated on its form. Some theologians have argued for a “pre-millennialism,” where Christ would return to Earth before that age, which is in contrast to “post-millennialism” where the Earth would be perfected in preparation for Christ’s return. There are shades of nuance, and it should be emphasized that, for example, the Roman Catholic Church, which is the largest Christian denomination in the world, largely adheres to an amillennialism, which interprets that narrative as being allegorical, as argued by Augustine in the fourth century. 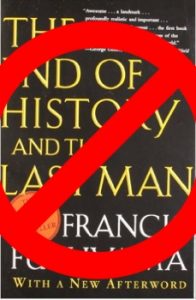 In the United States, however, we are nothing so much as the children of Puritans, and across our partisan divide we all have the echoes of those old prophecies ringing in our ears. Among many evangelicals and fundamentalists pre-millennialism has reigned ascendant since the nineteenth-century, but historically the Puritans (with important exceptions) were staunch post-millennialists, who adhered to the idea that the human polity could be reformed in preparation for the last moment of history, for the “eschaton.”

It’s not hard to see how both left-wing and right-wing movements which believe in the restructuring of society are indebted to a millennialism half remembered. German philosopher Carl Schmitt has been oft-quoted as having written, “All significant concepts of the modern theory of the state are secularized theological concepts” – the most important observation about contemporary politics made in the last century. If Fukuyama and the neo-liberal architects of our past world seem as if they were advocating politics-without-politics it wasn’t because they rejected millennialism, rather it’s that they so fully embodied belief in it that they were certain they were already there.

Faith that history would end was a faith that humanity would successfully “immanentize the eschaton,” as the historian Eric Voegelin put it, arguing that utopians held that they could or had brought about history’s conclusion on our material world. Father of contemporary (and now moribund) modern conservatism William F. Buckley used “Don’t Immanentize the Eschaton!” as a slogan for the Young Americans for Freedom in the ‘60s, and the entire conservative movement as separated from the far-right has been marked by such skepticism. From Edmund Burke in the eighteenth-century through Michael Oakeshott in the twentieth, conservative intellectuals defined themselves by a certain political Augustinianism, a distrust of those who thought human means could bring about collective material and political salvation. But even they fell to the temptation of success, as a conservative like Fukuyama could mistake the brief victories of the Cold War as a respite from history, and through the stability of the ‘90s one could be forgiven for erroneously thinking that we’d reached history’s terminus, only to have that confidence slowly chipped away by 9/11, the Iraq and Afghan wars, economic collapse, and now our current hinge moment.

History, it would seem, has returned. Nobody can survey Vladimir Putin’s network of revanchist influence swaying elections in the West while promulgating the first new (and noxious) ideology of the third millennium, Xi Jinping becoming effectively dictator for life in China, nuclear saber rattling on the Korean peninsula, and the ever-rising temperatures and pretend that history has ended. Nobody can survey the United States, which elected an aspiring strong-man dictator (who worryingly might still pull that off), where economic disparities are ever growing, and where such a large segment of the population is dying of opioid addiction that the average life-expectancy keeps dropping, and imagine that ours is a utopia. Paradoxically, if we’ve realized that we never lived in millennium, the contours of millennialism have returned, and ours is an age where radical politics on the left and right long thought abandoned have returned. And so, we parse our push notifications and our news feeds to find some evidence of where history’s return will take us, and true to our desire to find patterns, we ask ourselves if 2018 is hopefully 1974 while fearing that perhaps it’s actually 1933.

Not only has the Overton Window (which describes the parameters of acceptable political discourse) shifted to both the right and the left, but the window itself seems like it’s been smashed. With the eclipse of neo-liberalism’s false millennium we have the emergence of new millennialisms, and none is more terrifying than the international coalition of reactionary forces which draw as their well-spring past poisonous fascisms. Far-right parties have been on the ascendancy across the West.

The node and inspiration for many of them is Putinism, for the Kremlin has supplied not only material comfort but, more crucially, a model of mystically-inflected, anti-democratic, racist nationalism. Consider Aleksandr Dugin, the Kremlin’s jester-historian who advocates for “fascism, boundless as our lands, and red as our blood.” This sort of evil perspective attracts a certain type of person, and it grows in the cracks formed from the crumbling of our old systems. If we don’t pay attention to it, then the weeds which grow from those cracks could ultimately strangle us all.

The shattering of the Overton Window has allowed for Putinism and all of its attendant ideologies to proliferate across the west, but it’s also theoretically made possible a reinvigorated left to emerge. In fact, if we’re to have any hope of defeating the reemergence of fascism, we have to build a new left coalition, and not just pray for Mueller and Stormy Daniels to save us.

Some on the left don’t appreciate how much the far-right is a variety of dark millennialism, and thus we do not react accordingly. Some have disparaged the reality of Russian tampering in the last presidential election, perhaps due to their own justified wariness of the U.S. national security apparatus. I would suggest that such myopia is ultimately defeatist.

More importantly, we must conceptualize that what has evolved like mold in a petri dish is a new variety of fascism that owes its model to Putinism, one which is organized, competent, and threatening. Shadi Hamid in the Atlantic perceptively, but incompletely, notes that “What liberalism’s critics appear unable, or unwilling, to address is whether a lack of meaning is a worse problem to have than a lack of freedom.” But humans are meaning making creatures who connect to narrative, regardless of their ideology, and that the new fascism supplies meaning for many people is horrifically undeniable. The risk is that the old order as celebrated by Fukuyama supplied little meaning and was selective in who experienced freedom. An attempted retreat to that world will not save us. Rather what will is a full demonstration that meaning ultimately dwells in genuine freedom and equality. What will save us is not the status quo, but a reinvigorated left, assuming that it understands that it’s adversary represents a dark millennialism, that we must address not just freedom and equality, but meaning as well. 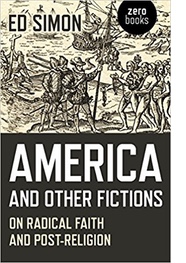 And so if you wish for any hope, consider a passage from Norman Mailer’s The Armies of the Night, written at a similarly divergent epoch some fifty years ago. He writes that we shall “Brood on that country that expresses our will. She is America, once a beauty of magnificence unparalleled, now a beauty of leprous skin. She is heavy with child… she will probably give birth and to what? – the most fearsome totalitarianism the world has ever known? Or… a babe of a new world brave and tender, artful and wild?”

So much depends on the midterms then, not just to act as a bulwark against Trump’s worst impulses, but far more importantly to prove that democracy still has some oomph in it. Historian Ernest Tuveson charted America’s understanding of itself as a “redeemer nation”; if this country has ever been a “last best hope” so much of it may now depend on demonstrating democracy at the ballot box this November. This counts double for the left who are justifiably suspicious of the Democratic Party, and thus would be best served by actually operating within it, and rebuilding it from the ground up.

There are indications that a “brave and tender” infant may await, indicated by the welcome developments of #MeToo, or the Parkland protestors, or the continued electoral victories for progressives in primaries and general elections. But victory is far from assured. And so, as midwives to what we pray will be a good, and just, and egalitarian, and free new world, we must march and vote and birth new meanings that redeem the world, for our posterity depends upon it.