One hundred years ago, Baruch Spinoza (1632-1677) was a famous philosopher, oft-quoted and respected, if notorious for his relationship with the authorities of his time. It is unclear why he fell out of fashion. We may have seen Spinoza’s statue in Amsterdam, or heard his name mentioned by another philosopher, but of Spinoza himself, we know nothing. This is unfortunate seeing as Spinoza is one of the most practical and relevant philosophers there is. There are all sorts of ways that we can apply Spinoza’s philosophy today. Henri Bergson, writing in the early 20th century, saw Spinoza as a philosopher of intuition. The Italian political theorist Antonio Negri argues that Spinoza is the key to understanding globalization and the postmodern age.

This post does not explore the work of these thinkers. I want to focus on Spinoza himself. 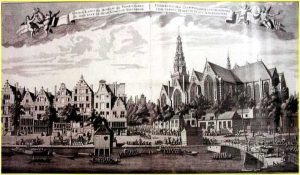 Spinoza was the son of a Portuguese merchant who had fled to Amsterdam with his family to escape the Catholic Inquisition. Spinoza senior couldn’t have picked a better place to have moved the family business. It was the height of the Dutch Golden Age and Amsterdam was the trading capital of the world. Amsterdam, moreover, was an excellent spot for Spinoza to begin a philosophical education. Through the seventeenth century, the liberal climate of Amsterdam drew a hoard of political and religious refugees from other parts of Europe, stimulating a lively intellectual culture. Strolling through Dam Square, Spinoza would have rubbed shoulders with French Huguenots, German Anabaptists, Spanish heretics, and Scottish freethinkers amidst the hustle and bustle of the markets and trade. Spinoza formed the principles of his philosophy long before he considered himself a philosopher, as a young man on the streets of Amsterdam.

Spinoza started working in the family business at fourteen. When his father died, he shocked his family by renouncing his share in the business to focus on his philosophical work. The decision was not taken well by the conservative Jewish community in Amsterdam. Nor did Spinoza’s liberal views on politics and religion impress the religious elders of the city. When Spinoza started publishing these views in books, the authorities decided they’d had enough. In 1656, Spinoza was issued the writ of cherem, casting him from the synagogue with the chilling words:

Spinoza wasn’t fazed. It was a chance to start anew. He changed his name to Benedict de Spinoza, left Amsterdam and devoted himself to a life in philosophy. 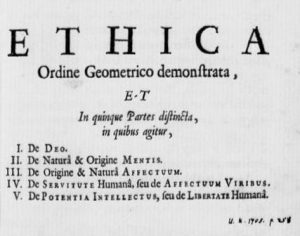 Spinoza’s magnum opus, The Ethics (published posthumously in 1677), is a classic work of seventeenth century rationalism. The Ethics is a fascinating book about God, Mind, and Body. Unfortunately, the core intuitions of the book can be hard to grasp thanks to the approach Spinoza takes to unpacking them. The Ethics takes a ‘geometrical’ approach to its subject matter, treating God, mind and human action in the same way, as Spinoza puts it, as one would conduct ‘an investigation into lines, planes, and bodies’. The book opens with a set of axioms and definitions about the nature of ‘substance’, ‘attribute’ and ‘mode’. It proceeds by deductive reasoning through a set of numbered propositions to conclusions about happiness and the good life. It does not make for easy reading. To follow the argument, one has to track an expanding network of propositions, connected by bewildering logical leaps. Many readers get lost and give up.

Most people who make it through The Ethics understand it on an intuitive level. Yakov Bok, the unschooled protagonist of Bernard Malamud’s novel, The Fixer, picked up The Ethics on a whim. He read it, he relates, with ‘a whirlwind’ at his back. ‘I didn’t understand every word’, Yakov confesses, ‘but when you’re dealing with such ideas you feel as though you were taking a witch’s ride. After that I wasn’t the same man’.

The Ethics can be understood intuitively because there is a simple intuition at the base of it. I call this the ‘grounding’ principle. The grounding principle is as follows:

Take a moment, if you will, to reflect on this principle. It encapsulates an abstract idea. This idea (like the principle itself) is intended to apply universally to all bodies, substances, things, and creatures that exist. For Spinoza it is the divine principle of God or Nature. Now, this may sound a bit whacky. But if we stick with the principle and think it through, something interesting occurs. Spinoza’s grounding principle changes the way that we see the world. 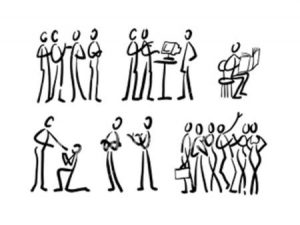 Let’s try this out, limiting ‘interactions’ to interpersonal encounters, interaction between human beings. We interact with other people all the time. We interact with people by touching them, smelling them, seeing them, hearing them, talking with them, and just being with them or thinking about them. Spinoza’s insight is that every kind of interpersonal interaction changes us on a physical level. It affects us. We are affected by our interactions and encounters with other people. From the nature of this affect, we can tell whether or not this interaction is good, or healthy, for us, or not.

We now see why The Ethics has the title it does. Spinoza’s philosophy is all about the flourishing life. Interactions with other bodies either consolidate our structure, and empower us, or they or destabilize our structure, and disempower us. Should we want to live a full, rich, flourishing life, it makes sense that we should pursue interactions and encounters with people that positively affect our systems, increasing our powers to exist. Spinoza’s ethical insight is that we should focus on building relationships with people who enhance our powers and abilities. We should seek, that is, to form empowering friendships. Interestingly, since the grounding principle is the expression of ‘God’, a divine power in Nature, we get closer to God by pursuing these friendships.

Friendship, for Spinoza, is a divine event based in a mutual sense of empowerment. Friendships and love relationships are expressions of ‘blessedness’ – the ethical ideal.

Social life, for Spinoza, is a chemistry experiment. Friends are people who implicitly (perhaps even unintentionally) help us catalyse and sustain the powers that we enjoy in life – powers that, in many cases, we wouldn’t have independantly of these people. One friend helps you cultivate your creative side. Another picks you up when you’re feeling down. One friend inspires you to be the best that you can be. With another, you have a great time out on the town.

True friends consistently trigger empowering changes in our physical and neurochemical systems. Without these friends, we might never experience these affects and the sense of empowerment they bring.

Spinoza’s philosophy of friendship can help us successfully engage with social life. With Spinoza’s grounding principle on hand, you are ready to engage the social world and thrive. The trick is to approach new conversations with an open heart and a mind attuned to new possibilities. Pay attention to positive affects as you go. Positive affects are your clue to identifying empowering relationships. Follow your intuitions and live from the heart.

Treat life as a fascinating experiment. The reward of Spinoza’s philosophy is a life of strong relationships, which is blessedness itself.