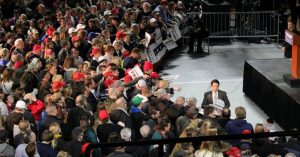 A new study confirms that President Doanld Trump’s campaign rallies leading up to the 2016 election were linked to an increase in violence in the cities where they were held. (Photo: Evan Guest/Flickr/cc)

Lead researcher describes it as “phenomenon that’s unique” to rallies held by the president.

Confirming what was suspected by many Trump critics, researchers at the University of Pennsylvania on Friday revealed a correlation between President Donad Trump’s campaign rallies during the 2016 election and a rise in violence in the cities where they were held.

“It appeared to be a phenomenon that’s unique to Donald Trump’s rally,” Christopher Morrison, the lead author of the study, told the New York Times.

Looking at 31 campaign events held by Trump and 38 held by his opponent in the general election, Hillary Clinton, researchers found an average of 2.3 more assaults in cities across the country on the days of Trump’s rallies. They did not find a link between Clinton’s rallies and an uptick in violence.

On an average day, the cities reported an average of 19.4 assaults, while they found 21.7 incidents when Trump was in town rallying his supporters.

During the 2016 campaign, reports of physical altercations at Trump events became common, with Slate compiling a list of 20 violent incidents from October 2015 until June 2016.

Three of the incidents appeared to have been perpetrated by anti-Trump protesters. Pro-Trump attendees as well as Trump staffers were behind 14 of the attacks, in which protesters and journalists were the victims.

The then-candidate frequently encouraged violence amongst his supporters, asking a crowd in Iowa in February 2016 to “knock the crap out of ” protesters in the crowd and promising, “I will pay for the legal fees.”

Weeks later he declared, “I’d like to punch him in the face,” as a protester was led out of another rally.

After a protester was reportedly punched and kicked at an event in November 2015, Trump suggested, “Maybe he should have been roughed up.”

Last year, a Trump supporter who was seen on video pushing a protester said he agreed that Trump’s speech at a rally in Louisville, Ky. “was calculated to incite violence,” after being named in a lawsuit filed by three people who were harmed at the event.

The authors of the study suggested that the overall increase in violence at and around Trump rallies was either the result of clashes at the events, or of the aggressive mood displayed at the events which then spread via “social contagion.”