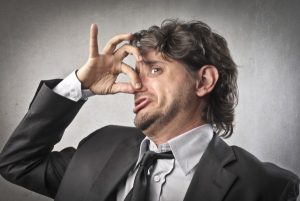 Believe it or not, that’s what part of people’s brains do as they almost automatically can tell you’re not well. Yes, the human nose can apparently detect disease,according to research published in Psychological Science. And the nose knows the person is fighting off an infection, even if the eyes can’t see it.

Wray Herbert’s piece notes that it has long been known that smell can detect some things about health:

Nurses and hospice workers say they can smell the final approach of death. Not with sudden death, but with the slow march toward the grave, the body’s systems begin to shut down and metabolism changes, so that breath and skin and fluids give off a distinctive odor that signals the end is near.

There is often the expression someone “smells like death.” And, yes, it is perceptible:

This is not surprising. In fact it’s more perplexing that deadly diseases don’t announce their presence earlier. From an evolutionary perspective, it would be more advantageous if we could all detect early warning signals, olfactory cues that the immune system is gearing up to ward off a new and threatening disease.

Psychological scientists call this the behavioral immune response. The idea is that the healthy would have a better chance of surviving an epidemic if they could identify its first victims—while they are still looking well—and steer clear. Unfortunately, those early churnings of the immune system are far too subtle to detect.

That’s where Scientists at Sweden’s Karolinska Institutet, working with their colleagues at the Monell Chemical Senses Center, decided to “test the idea that humans can perceive a difference between the body odors of healthy and sick people—even when they don’t appear any different. Assuming that such a sickness cue has evolved to lessen contamination risk, they wanted to see if they could detect such a cue in the early stages of the body’s sickness response.”

Here’s what happened next:

The scientists conducted their experiment by injecting a group of test subjects with lipopolysaccharide, a toxin that typically induces a rapid response from your immune system. The scientists then collected the sweaty shirts from the subjects and paired them with the sweaty shirts from a control group of people who weren’t injected with lipopolysaccharide.

The shirts were then given to a third group of people to smell. On the whole, the shirt-sniffers rated the smell from the “sick” shirts as more foul than the smell from the “healthy” shirts. The scientists have yet to identify the specific chemicals that gave off foul odors but Psychological Science says the finding is important because “it grants us a better understanding of the social cues of sickness, and might also open up doors for understanding how infectious diseases can be contained.”

This is “the first experimental evidence that disease smells and supports the notion of a ‘behavioral immune response’ that protects healthy individuals from sick ones by altering patterns of interpersonal contact,” the authors write.

The volunteers from the study reported that the most difficult part of the task was assigning a health rating to each smell. The researchers recognize that the health rating could have been influenced by the pleasantness rating — less pleasant smell naturally means less healthy smell, right?

It’s probably not that simple. The researchers point to previous research, which suggests that an unpleasant smell triggers disgust and “the emotion of disgust has evolved as a disease-avoidance mechanism.”

Interestingly, the volunteers could smell the unhealthiness just a few hours after the immune system was triggered — probably before a person would even know they are infected with a cold or flu. This suggests that smell could be an important warning signal that works to keep us healthy.

And, at the end of his piece, Wray Herbert adds:

The scientists want to look at the role that disgust plays in the behavioral immune response. It’s been suggested that this emotion evolved as a disease avoidance mechanism, which would be consistent with this evidence of aversive odors.

Is this the same disgust that makes me turn off ideological radio and cable talk shows that also are marked by an aversive odor?