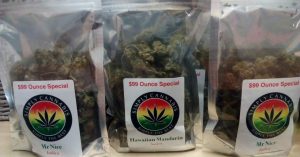 This week, Vermont became the ninth state to legalize recreational marijuana use. Dispensaries have opened in recent years in California, Colorado, and other states amid a growing movement to decriminalize the substance. (Photo: Beverly Yuen Thompson/Flickr/cc)

A growing majority of Americans support the legalization of marijuana for personal use, according to a new poll by NBC News/Wall Street Journal.

Sixty percent of those surveyed said adults should have the right to buy marijuana, with even higher levels of support among Democrats and respondents under the age of 35.

The survey results were consistent with another recent poll taken by Pew Research Center earlier this month, which found that 61 percent of Americans back legalization.

Nearly three-quarters of people ages 18 to 34 supported legalization according to the new poll. While support was lower among those ages 35 to 49 and 50 to 64, majorities in both age groups said the substance should be legalized.

The poll showed an increase in support since 2014, when only 55 percent of Americans supported legalization.

The survey results came out days after Vermont became the ninth state to legalize recreational marijuana use for adults ages 21 and older, with a law that will go into effect in July. The state is the first to pass legalization through its legislature rather than a ballot initiative. Maine, Massachusetts, California, Oregon, Washington, Colorado, and Alaska have all decriminalized the substance in recent years.

New Jersey and Michigan are expected to vote on legalization this year, while groups in red states including Oklahoma and Utah are mounting efforts to include medical marijuana use on this year’s election ballots.