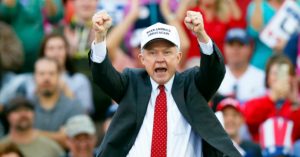 U.S. Attorney General Jeff Sessions cheers on the crowd during a rally for then President-elect Trump in Mobile, Alabama, in December of 2016. (Photo: Brynn Anderson/AP)

Democratic leaders are calling for the resignation of Attorney General Jeff Sessions after the Washington Post‘s damning revelation that the former U.S. senator met with the Russian ambassador twice last year and thus may have committed perjury during his senate confirmation hearing.

Post reporters Adam Entous, Ellen Nakashima, and Greg Miller broke the news late Wednesday that the then-Republican senator from Alabama held a “private conversation” in his office with ambassador Sergey Kislyak during the final push of President Donald Trump’s presidential campaign in September and, as the reporters noted, “at the height of what U.S. intelligence officials say was a Russian cyber campaign to upend the U.S. presidential race.”

That was after Sessions reportedly held a one-on-one conversation with Kislyak on the sidelines of the Republican National Convention in July, according to the unnamed Justice Department officials quoted by the reporting.

Perhaps even more damning, during Sessions’ Jan. 10 Judiciary Committee hearing, the nominee said that he was “not aware of” any communications between the Trump campaign and the Russian government and stated: “I have been called a surrogate at a time or two in that campaign and I did not have communications with the Russians.”

In response to the outcry, Sessions—who now heads the Department of Justice—on Thursday offered to recuse himself from any investigation into possible Russian involvement in the election. However, the attorney general continued to deny any wrongdoing, arguing that the conversations were not relevant to Trump’s bid for president. However, his office said they cannot provide any “notes” on the September conversation to prove otherwise.

At the time of the conversations, the reporting notes, “the senator was a senior member of the influential Armed Services Committee as well as one of Trump’s top foreign policy advisers. Sessions played a prominent role supporting Trump on the stump after formally joining the campaign in February 2016.”

Top Democrats, including House Minority Leader Nancy Pelosi, are calling for Sessions to resign as AG on the basis that he “lied under oath” and thus “is not fit to serve as the top law enforcement officer of our country and must resign.” Similarly, Sen. Elizabeth Warren (D-Mass.) wrote on Twitter: “We need a real, bipartisan, transparent Congressional investigation into Russia. And we need Attorney General Jeff Sessions—who should have never been confirmed in the first place—to resign. We need it now.”

According to a statement put forth by the House committee, the investigation will seek to answer the following questions:

What Russian cyber activity and other active measures were directed against the United States and its allies?

Did the Russian active measures include links between Russia and individuals associated with political campaigns or any other U.S. Persons?

What was the U.S. Government’s response to these Russian active measures and what do we need to do to protect ourselves and our allies in the future?

What possible leaks of classified information took place related to the Intelligence Community Assessment of these matters?

Even before it was revealed that Sessions himself was in contact with Russian officials, there has been a mounting call for a special prosecutor to be appointed to the case.