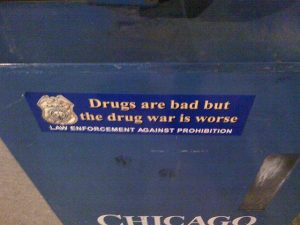 President Barack Obama’s commitment to increased investment in drug treatment is welcome, but people will still face barriers to accessing services due to stigma, something decriminalization can help tackle.

Late last month the White House committed $116 million of funding to tackle the United States’ so-called epidemic of opioid misuse. The majority of this funding will be directed towards expanding ‘medication-assisted treatment’ and naloxone provision. However, a small sum — $7 million — will be used to finance an Anti-Heroin Task Force to investigate heroin and prescription opioid distribution, a move deemed to be “step backward” due to the continued focus on policing, as Michael Collins from the Drug Policy Alliance (DPA) told the Guardian.

Grant Smith, also of DPA, summed up the mixed reaction from reformers to Obama’s announcement, saying:

“… the Administration still lags behind in its unwillingness to step away from the criminalization of people who use drugs. They fail to acknowledge that we must fundamentally change the role of law enforcement and end criminal penalties, if we are to truly address this crisis as a health issue.”

Indeed, if the US government wants to see success through the provision of treatment and harm reduction services to those who use opiates problematically, it must concurrently decriminalize possession of drugs for personal use. This move would, among other things, help tackle a key barrier to service use – stigma.

Numerous studies have outlined how the stigma faced by people with problematic drug use acts as a hindrance to accessing drugs services. These people — and the the term people should be stressed here as it is so often lost when talking about addiction — are confronted in society by demonizing labels such as ‘addict’ or ‘junkie,’ and may fear finding a similar environment even in a treatment setting, thus shying away from entering it. Furthermore, stigma can instill feelings of shame or worthlessness which similarly discourage service use.

Decriminalization is by no means a cure-all in when it comes to confronting stigma, but it would be an incredibly positive step toward eliminating it. For one, stigma is born largely out of the criminalization of people who use drugs and the attitude it engenders of illicit drug use as something inherently bad, particularly when it is problematic. Dr. João Goulão, a key architect of Portugal’s decriminalization model, noted how effective decriminalization was in changing these social attitudes, stating in 2011:

“The biggest effect has been to allow the stigma of drug addiction to fall, to let people speak clearly and to pursue professional help without fear.”

With decriminalization comes better public education around drug use, dependence and addiction, and thus evidence-informed stances toward them that have the potential to permeate throughout society, media and political discourse. This has enormous positive implications for an individual suffering from problematic use through removing a potentially hostile treatment or service environment.

The US media can’t help but address the country’s opioid ‘crisis’ on a weekly basis it seems, and the increased focus from policymakers is welcome particularly as there seems to be a move toward implementing evidence-based public health measures to attend to the problem. Yet, if they really want to ensure change and that these services are reaching the people who need them most, they must explore legislative reform around drug use and possession.

Public attitudes in the US are shifting, with more people wanting to see a focus on treatment over prosecution for illicit drug users, according to a 2014 Pew Research Center survey. Though this view is problematic in itself due to the medicalization of drug use, it nonetheless points to an acceptance that criminalization is not the answer. It’s time for law makers to take note of this and swiftly decriminalize if they are to truly address their public health crisis.