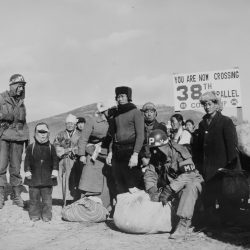 The latitude line passing between the North and the South has separated generations of families. The Korean War, from 1950 to 1953, saw some of the most intense battles in American military history. A total of 33,700 soldiers, sailors, marines, and Air Force personnel were killed in Korea; more than 100,000 were wounded. The fighting[…]