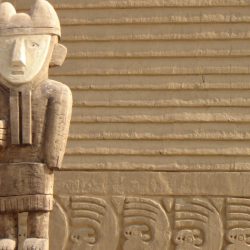 The initial prosperity of the Chimú was largely due to their agricultural skills as they built an extensive irrigation system using canals. Introduction The Chimú civilization, otherwise called the kingdom of Chimor, flourished on the northern coast of Peru between the 12th and 15th centuries CE. With their capital at Chan Chan the Chimu were[…]