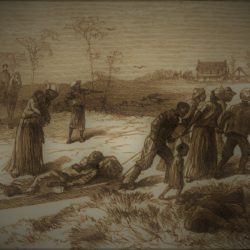 In the wake of the contested 1872 election for governor of Louisiana and local offices, white terrorists killed almost 50 freedmen. Introduction The Colfax massacre, sometimes referred to by the euphemism Colfax riot, occurred on Easter Sunday, April 13, 1873, in Colfax, Louisiana, the seat of Grant Parish, where an estimated 62-153 black men were[…]