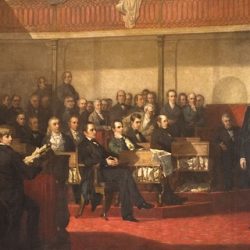 New England statesman Daniel Webster believed in strong, centralized power when it served his region’s interests. For generations, school children memorized the ending to Daniel Webster’s “Second Reply to Hayne,” delivered during the famous Webster-Hayne debate of January 1830. This most-famous-of-debates began in a modest fashion, with an argument over westward expansion and morphed into[…]