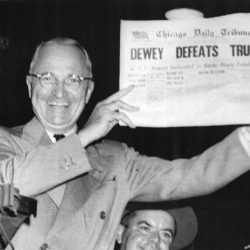 He won the support of Roosevelt’s “New Deal” coalition: labor, Blacks, Jews, farmers from the Midwest, and a number of southern states. Introduction Democratic Party’s poor showing in the 1946 mid-term congressional elections—in which the Republican Party took control of both the Senate and the House of Representatives for the first time since 1928—considerably dimmed[…]