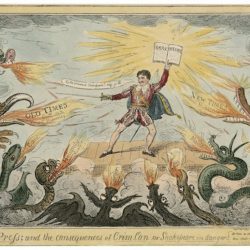 Kean’s acting style reframed the relation between the British theatrical tradition, the actor’s stage performance, and audience reception. In a conventional sense, Edmund Kean’s London debut at Drury Lane theater on 26 January 1814 matters because it marked the arrival to the metropole of the man who would become the early nineteenth century’s most important actor. In[…]