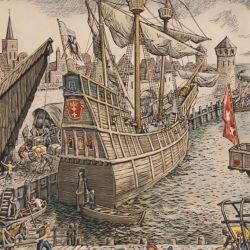 The League aimed to protect trade, which meant that maintaining peace was also a major concern. Introduction The Hanseatic League (also known as the Hansa) was an alliance of trading guilds that established and maintained a trade monopoly along the coast of Northern Europe, from the Baltic to the North Sea, during the Late Middle Ages and Early modern period (circa thirteenth–seventeenth centuries). Rival cities[…]