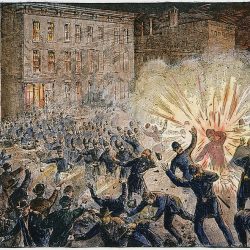 Introduction The Haymarket affair (also known as the Haymarket riot or Haymarket massacre) on Tuesday May 4, 1886, in Chicago, began as a rally in support of striking workers. The strikes began on May 1st in Chicago and other locations in support of an eight hour work day. After several days of strikes, an unknown[…]