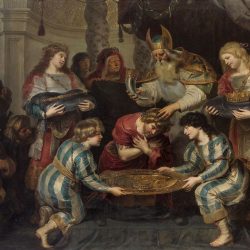 By sanctifying the royal body, the act of anointing has often been believed to confer healing powers. The climax of the royal coronation ceremony at Westminster Abbey in London is the act of anointing: the monarch is consecrated with holy oil applied to the hands, breast and head, while the Archbishop of Canterbury declares: ‘As[…]