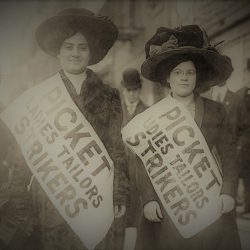 During the early to mid-20th century, American textile workers of all categories were subjected to abysmal working conditions, Introduction The New York shirtwaist strike of 1909, also known as the Uprising of the 20,000, was a labour strike primarily involving Jewish women working in New York shirtwaist factories. It was the largest strike by female American workers up to that date. Led by Clara Lemlich and[…]