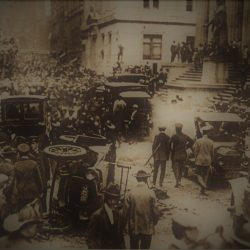 The bombing was never solved, although investigators and historians believe it was carried out by Galleanists (Italian anarchists). Introduction The Wall Street bombing occurred at 12:01 pm on Thursday, September 16, 1920, in the Financial District of Manhattan, New York City. The blast killed thirty people immediately, and another ten died later of wounds sustained in[…]