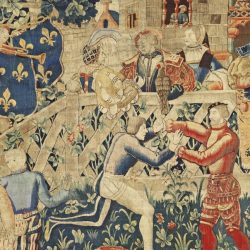 The accession of Henry VII as the first Tudor king is generally considered the end of the Middle Ages in England. By Dr. Libby Karlinger EscobedoArt Historian Introduction The Tudor age spans 118 years and the reigns of five monarchs. The first Tudor king, Henry VII, ascended the throne following a period of dispute between[…]