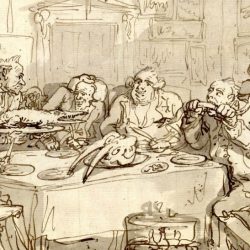 The humble sea turtle became the pinnacle of haute cuisine in the eighteenth century. From calipash to calipee, the green sea turtle was without doubt the most expensive, status-laden, and morally contested feat of eighteenth-century English cuisine. Virtually unknown as human food before mid-century, the amphibious reptile quickly became an enduring symbol of both refined taste and savage indulgence,[…]