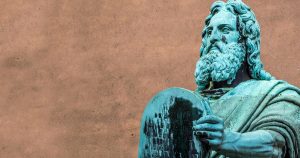 The Constitutional Convention of 1787 was one of the most momentous events in American history – and perhaps even world history.

A band of leaders from the new nation pulled together in Philadelphia to write a governing charter. Towering figures such as Alexander Hamilton, Benjamin Franklin, Gouverneur Morris, James Madison and George Washington gathered in the same room. It was history in the making.

We have a list of attendees. We know who was there. And we can state authoritatively that Moses was not among them.

Try explaining that to education officials in Texas.

For years, social studies standards in Texas have insisted on portraying Moses as a kind of honorary Founding Father. No one seriously argues that his ghost was in the room, but conservatives on the Texas State Board of Education continue to assert that the biblical law-giver was an important influence on the development of the U.S. Constitution.

The problem is, there’s no evidence of that. Yes, Moses was one of history’s most famous law-givers. But the code he delivered to humankind, the Ten Commandments, did not form the basis of our government. The Ten Commandments were designed to regulate the religious and moral behavior of ancient peoples. They’re not a blueprint for government.

The Texas board had an opportunity to clear this matter up recently but declined to do so. Members were examining social studies standards for high school students and did make some improvements. For example, the standards will now make the connection between the Civil War and slavery more explicit, and some inflammatory language unjustly linking Islam to terrorism has been toned down.

But Moses is staying in the standards.

“Maybe he was a law-giver, but that doesn’t mean he influenced our Founding Fathers,” said board member Ruben Cortez, a Democrat from Brownsville. “That doesn’t mean we can make a giant leap that someone from an entirely different continent centuries ago … was somehow responsible for drafting … these founding documents.”

Good point. Unfortunately, the board, which is dominated by conservative Republicans, wasn’t swayed.

“In the United States, the most common book in any household in this time period was, in fact, the Bible, and people who didn’t necessarily believe in religion as such … still had a great knowledge of the Bible,” said GOP board member Pat Hardy of Fort Worth. “In referencing Moses in the time period, they would have known who Moses was and that Moses was the law-giver.”

The problem with the Texas board’s Moses fetish is that it denies students the right to hear the real story of the creation of the Constitution and, subsequently, the Bill of Rights. That’s a pretty amazing story; it’s one all Americans ought to hear.

It’s not a story about how our founders decided to create a religious state by basing our founding document on the Ten Commandments. Rather, it’s a story about the development of the world’s first secular republic, a democracy with a charter that, even though it didn’t get everything right, was flexible enough to eventually encompass everyone.

It’s a powerful story. It’s inspirational, and it’s worth telling. It also has a great cast of characters – but Moses isn’t one of them.

Originally published by Americans United for Separation of Church and State, republished for informational, non-commercial purposes.