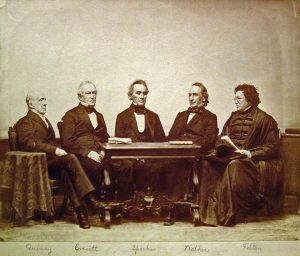 Jared Sparks—editor, historian, Harvard president—deposited a bundle of primary documents at Boston’s Massachusetts Historical Society (MHS) in the fall of 1838. It held a dozen or so political tracts, pamphlets, and newspapers from the middle of the previous decade capturing developments in the South American republics. There was nothing exceptional in such a Brahmin’s contribution to those archives, founded as the nation’s first historical society in 1791. A glance at the catalogues of donations and acquisitions in the MHS’s early decades reveals a local elite eager to give to its burgeoning collections. By also enticing a fairly far-flung network of corresponding members to contribute, the MHS exercised a strong centrifugal force. Within slighter orbits, the many state and local historical societies springing up from the 1820s onward followed this model, as H.G. Jones has shown most recently. Such new societies along the seaboard and in frontier cities drew toward them the scattered material record of the American past. And, dispersing diplomas and recognition, they urged filial piety to a swiftly passing revolutionary generation, which many were delighted to perform.

Accessions piled up at the MHS. So, amid the compendia of donations in the first half of the nineteenth century, there is no reason Sparks’s modest collection of documents should stand out. But if stepping back or peering in closer, how can we read the construction of such American archives, and the meaning of a modest contribution like Sparks’s within them? Giving to an early archive represented the performance of some relationship with the American past, and it often implied a particular vision of the nation and its prospects. Closely reading these donations can reveal historical perspectives or arguments against what the societies might have imagined. On the broader phenomenon of performing and contesting historical consciousness in the early republic, scholars such as David Waldstreicher and Simon Newman have explored how it played out in the streets. In the text, the contentiousness and contingencies of telling the colonial and revolutionary past has emerged in such works as Edward Watt’s fascinating reading of competing American narratives of the French colonial legacy, and this intriguing anthology on memory and accounts of the Revolutionary War. Meanwhile, the nineteenth-century historical discipline has received close re-examination more recently by Eileen Ka-May Cheng. But the construction of the American archive itself remains a murkier place.

An MHS circular letter first authored in 1791 by founding member and seminal American document-gatherer Jeremy Belknap and addressed to “to every Gentleman of Science in the Continent and Islands of America” gives a sense, at least, of their early archival imagination. In order to “collect, preserve, and communicate materials for a complete history of this country,” the MHS called on towns to respond to their fourteen-point memorandum, which ranged across military history, religion, population statistics, topographical description, traces of Indian life, economic production, and educational institutions. Fellow founder Thomas Wallcut cast the ambitious scope of the society: “A collection of observations and descriptions in natural history and Topography, together with specimens of natural and artificial curiosities and a selection of every thing which can improve and promote the historical knowledge of our Country, either in a physical or political view, has long been considered as a Desideratum” (Thomas Wallcut, 1791, Massachusetts Historical Society Archives, 1758-1934, Officer and Council Records, Box 7, MHS). 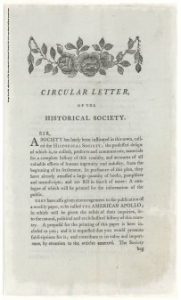 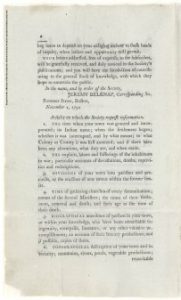 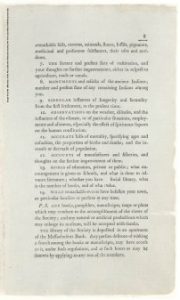 It was quite a desideratum, reissued in the following decades. Its numbered requests may have implied some proto-social scientific approach—perhaps belied by such inclusions as “singular instances of longevity and fecundity.” But it led to an unmanageable influx of paper and objects. In its first few decades, donors sent—or sought to sell—hundreds of election sermons, newspapers and pamphlets, personal papers and correspondence and Indian land deeds—satisfying at least some of the society’s stated aims.

Meanwhile, however, items more aptly deemed curious or totemic streamed in. This should not imply any clear partition between written and non-written traces of the past. Objects could be inscribed with or accompanied by text, and written records could surely attain meaning beyond their literal content. Tamara Plakins Thornton’s work on handwriting in the early US explores that theme, such as in the significance of autographs for appraisers and ravenous collectors. However, in the motley array of relics and specimens that Americans culled from their continent and the foreign world they increasingly encountered, the MHS collections brimmed over from the historical and into the encyclopedic. This is not to say these were all superfluous curios. But the whole is hard to read, and the sometimes intricate import of a donation can feel lost in the mélange. For instance, to take a snippet of donations reported at a 1792 meeting:

“…From Col. Andrew Symmes, One of the largest kind of spears used by the Savages on the N West Coast of America; Some hooks from the Northwest Coast and Sandwich Islands—a Ruler of Petrified Rice—and a Chinese Spoon […]”

“From Mr Elisha Sigourney an Egg of the Ostrich and some Shells from the Islands of the Indian Ocean [….]”

From one angle, these appear as a scattershot of exotic souvenirs, consigned to the relative obscurity of the society’s cabinet. And indeed, the MHS cabinet does not appear as a particularly accessible or well-curated site during these years. Yet from another perspective, it is a carbon copy in artifacts of the most ambitious and elaborate of American trade routes in the Early Republic—great oceanic arcs sweeping from New England, around South America to the Pacific Northwest, to the South Pacific, and onward to Canton, China, perhaps returning westward via the Indian Ocean. Stocked along the way, ginseng, silver, sea otter pelts, bêche-de-mer and other products proved barely enough to purchase coveted Chinese manufactured goods for delighted American consumers. It was a Boston story in particular—and one of great wealth and prestige, as much about inscribing the future as a record of the past.

Over decades, patriotic relics and Indian artifacts trickled in alongside such foreign and natural specimens. Again, though, items charged with a particular historical or other meaning can seem to homogenize in the archival catalogue. In 1832, John Watson of Germantown, Pennsylvania, and author of an often reprinted Annals of Philadelphia, sent northward various items. He presented an almanac annotated by English scholar Gilbert Wakefield, asserting that, “hand writing of such a venerable Patriot is a relic itself.” More literally, though, he also dispatched this hockey puck-sized box of relic wood, whether his own or another’s creation. On its bottom, he described its quadrants: “Walnut tree before the Hall of Independence-of the former forest there. The Mahogany is of Columbus’ house, St. Domingo, 1496. The Elm is of Penn’s Treaty tree Philda. The Oak, is part of a bridge once over Dock Creek, at Chestnut Street. The Gum is the last forest tree alive at Philda.-1832. ’Such relics as devotion holds / All sacred & preserves with pious care.’ ” 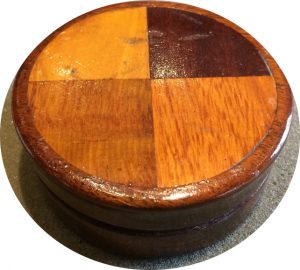 Authentic or not, the artifact’s invocation of Columbus, colonial Pennsylvania, the Founding, and contemporary Philadelphia was a powerful composite of metonymic associations. His donation may not have so much preferred the MHS over his own state’s repositories as it vaunted Pennsylvania’s preeminent place in American history. Indeed, his concluding verse sacralizes it. Again, such items may in theory contribute to broader archival “desideratum” of comprehensively telling the country’s past, but they also imagine variations—sometimes contentious ones—of the national stories emerging at that time.

These and sundry other items intersperse the long and narrow, chronological columns of documents in accession books at the MHS, as in many other historical societies’ catalogs. These columns almost teeter under the awkward diversity of things piled up to tell a part of the American past. At once, those columns might also appear to homogenize acquisitions into some unitary narrative project. Returning to Sparks, his bundle of documents appears as just a few blocks of text in these columns. Alongside myriad sermons, and such varied artifacts and singular relics, how could we interpret his papers as more than lines among many lines of accessions? And amid the arrival of so much, how could historical society members, the curious public, and visiting researchers broach it all? Though Sparks’s gift makes easy sense in the contexts of performing elite male identity and of heteroglossic donations, it fits oddly in the context of his life and work. 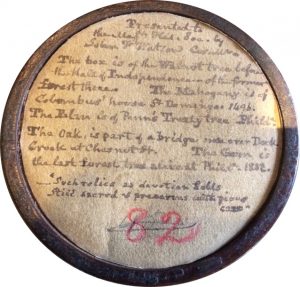 Sparks’s literary labors produced such ambitious undertakings as his editorship of The Diplomatic Correspondence of the American Revolution (1829-30) and The Library of American Biography (1834-38), alongside publications of the life and writings of John Ledyard, Gouverneur Morris, and Benjamin Franklin. Beginning in the mid-1820s, though, his most abiding, near obsessive project, atop any archival pantheon, was the collection, curation, and republication of George Washington’s papers (1834-38). He fought and won access via Judge Bushrod Washington to Washington’s papers at Mt. Vernon. He roved the US and visited European state archives. He recorded oral histories. And he activated a wide-ranging network of correspondents. Day by day, in this mammoth effort of re-composition, he accumulated a massive collection of Washington’s doings and writings, along with quite a few artifacts. Throughout his diaries, we see through his gaze a geography of unrecovered papers and a demography appraised by individuals’ access to them. He became a perambulating archive of sorts. Only begrudgingly in 1835 did Sparks ultimately transfer to the US State Department the 192 bound manuscript volumes of Washington’s papers which he had already sold to them. (Indeed, he seems to have flirted with the idea of using them as a security for a $5000 loan that year.)

This drive to gather and keep propelled Sparks’s many labors, including those behind his spirited effort to build a collection of the South American revolutions and early independence in the mid-1820s. From the vantage point as editor of the North American Review, he pressed the US consular officers and diplomats stationed throughout the new South American republics, as well as local men of state and letters, to collect and dispatch all documents covering the full sweep of revolution and independence there. He wrote in rhythm with the approaching Panama Congress of 1826, orchestrated by Simón Bolívar, and aspiring to coordinate a South American security policy against feared infringement by Spain and the Holy Alliance. As Sparks began to comb the North American landscape for the written traces of its revolution, he simultaneously looked southward from 1824. In his many letters there, we sense his urgency to educate his compatriots about South America, to compile a comprehensive history of their revolutions, and perhaps to tell a hemispheric history of American revolution to suit the inchoate geopolitical vision of the Monroe Doctrine. His appeals for paper, and reproofs when it was not forthcoming, crescendoed as the US Congress debated sending a delegation to Panama.

And then, suddenly, they stopped. Surely discouraged by the miscarriage of the US delegation and the potential for inter-American concert, Sparks moved on. He redirected his energies from South America to the American South and Canada, and then across the Atlantic to the French and British records of his republic’s independence. This North Atlantic story replaced a budding hemispheric imagination. A decade later, Sparks deposited a portion of his small South American archive at the MHS, a rare off-loading from his collections. Again, how might we read the material construction of an archive in this period, when a submission can be as much a history— or, indeed, an imagined future—untold or jettisoned, as part of some comprehensive record of the past?