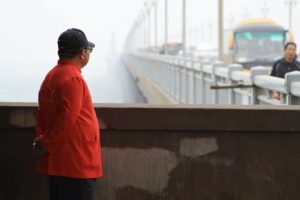 The Yangtze River Bridge in Nanjing, China, is one of the most popular suicide spots in the world, and also the place where one man has spent all his weekends and holidays over the last 13 years trying to convince people out of ending their lives. He has so far been able to save over 300 people.

Chen Si claims that he can approach and talk people out of jumping off the bridge, because he knows how they feel. Many of those who attempt to commit suicide on the Yangtze River Bridge are not actually from Nanjing, but migrant workers living far away from home. Mr. Chen was like them once, a migrant disappointed with his life, living far away from his family. But then he met an old man who offered him optimistic advice and helped him look at life in a positive way. Unfortunately, not longer after they met, the old man’s sons started arguing about their inheritance, and he got so upset that he stopped eating and eventually died. It was this tragic event that inspired Chen to help troubled souls overcome their difficulties and persuade them that life is worth living. He always believed that if he had visited the old man sooner, as he had planned to do, he might have convinced him of that as well. “What could be more important than life itself?” he asks.

So every weekend since 2003, Chen Si has been traveling 25 kilometers from his home to the Yangtze Bridge and patrolling it for hours, either on foot or on his scooter, looking for people who look like they might be thinking of jumping into the river. He pays particularly close attentions to loners staring into the muddy waters below. Chen says he has become an expert at spotting people contemplating suicide. “It is very easy to recognize,” he says. “A person walks without a soul.” 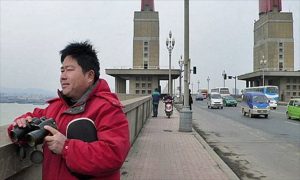 Chen’s style of intervention depends on the situation. To the people who haven’t yet built up the courage to go over the railings and jump, he talks gently, like a therapist, hoping to change their minds, but he can get aggressive if the person is getting ready to go through with their plan, and fast and decisive action is required. Although he has been named “the guardian angel of Nanjing” and has received high praise for his voluntary dedication, not everyone appreciates his interfering. Mr. Chen has been the target of verbal and physical abuse from the very people he was trying to save, but he hasn’t let a few bruises and cuts deter him from saving as many people as he can.

But convincing people to give life a second chance is only part of his intervention. To make sure that these people won’t return to the bridge once he’s gone, he has rented an apartment in Nanjing where they can stay for a couple of days to clear their heads and receive psychological counseling. He often call these people for weeks after their suicide attempts to make sure they are alright, and if they have financial problems, he will call their creditors and persuade them to lessen the financial burden they are under. Anything it takes to save their lives, Chen will do it. 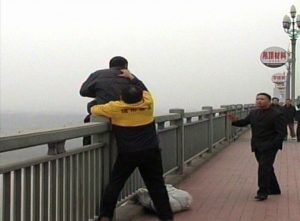 In the Angel of Nanjing, a recent documentary about his 13-year-long effort to prevent suicides on the Yangtze River, Chen Si admits that he isn’t as successful at saving people as he would like. He has watched 50 people jump of the bridge before he could even approach them, and then there are those who take their lives when he is not there. In the hopes of saving at least a few of them, he has left his phone number on the bridge so they can call him for support.

But while the world applauds his long-term effort to save lives, Chen Si struggles to keep his sanity and positive attitude in the face of so much pressure. Ever since he became famous in the press, he constantly receives phone calls from all over the country, but he can’t help them all. Then there are the sad, often time tragic stories of those he does manage to save. The dedication to this noble cause has put a strain on his marriage and alienated many of his friends. Chen says that ever since he started patrolling Yangtze, he has become a chain smoker, has turned to alcohol and often struggles with depression himself. But he won’t give up his mission, it is too important.