Chris Edwards is good with people but hates photographing them. Instead, he shoots buildings. For nearly a decade, he made a career out of immortalizing them on film, so he knows that architectural photography—long thought of simply as documentation—is an art. Capturing the right angle of a building allows it to open up, much like the way an individual’s personality can be revealed in front of a camera.

Edwards now works as the imaging and digital media architect at the Getty, where he brings his former career to bear on new projects. I recently turned the spotlight on him to ask a few questions about photographing spaces for 3D modeling, working with the curators of the recent exhibition Berlin/Los Angeles: Space for Music, and the issue of ownership with photographs of buildings.

Marissa Clifford: What is your background in architectural photography?

Chris Edwards: I have a degree in art photography, and then once I got out of college, I fell into photographing architecture professionally before I started working for institutions. I was lucky enough to start working with professional photographers like Tim Street-Porter and Christopher Irion in the mid-1990s, photographing a lot of boutique wineries and new construction buildings, and that really got me set up for my own career in architectural photography.

MC: Does photographing a building change how you perceive it?

CE: Photographing buildings is a really intimate process for me. I don’t photograph people, ever. Personally, I feel really comfortable photographing buildings. You get to spend time with a building. A building, if it’s a place where people live, is typically a representation of the person who lives inside it, and if it’s a built structure, if it’s a new construction, or even if it’s an artistic endeavor, it’s a representation of what the architect’s intentions were—what they’re trying to express. So photographing a space does change the way I interact with it, because I’m trying to understand the people who are living in it, what it’s meant for, but also trying to understand what its message is.

Do you think photographing architecture is an art in its own right?

CE: Oh, absolutely. It is my job as a photographer to interpret what the architect is trying to express. But you always have to be faithful in your interpretation to what the intent is as well. So it’s an art literally but it’s also an art figuratively. I’m doing a dance to try and work with the architect and the building to figure out what is trying to be expressed. 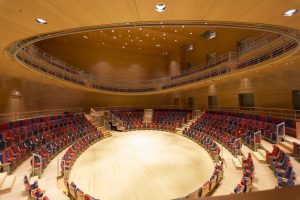 MC: Do you feel there’s a tension in architectural photography between it being both an artistic medium and a mode of documentation?

MC: How do your decisions vary based on the type of photographs you’re asked to take?

CE: The end use of a photograph is really important to how the process of interpretation happens. If it’s being used for documentation for the architect, that’s one use case. Another would be for a publication, and often times that can be driven by an art director or direction from whomever is commissioning it. But again, a lot of it comes back to what your style is and why you were hired to do this work in the first place. My favorite kind of work is when I’ve been hired to photograph a building as I see it, because whoever commissioned it wants my point of view.

MC: Who owns an image of a building?

CE: With most modern photography of architecture, the photographer will own the rights, whether they’re exclusive or nonexclusive rights, to use of the photograph. There are examples where the architect will negotiate, but I think that some of the issues that have existed in the past have been learned from. Issues with copyright surrounding the Bauhaus photographs have served as a teachable moment for photographers of why it’s so important to negotiate rights.

MC: What type of equipment did you use when you photographed the Berlin Philharmonic for the Getty Research Institute’s exhibition Berlin/Los Angeles: Space for Music? 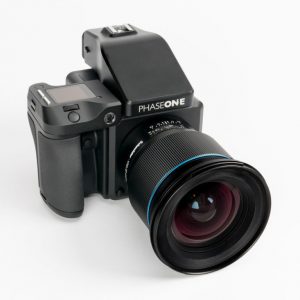 CE: Here at the Getty, we use Phase One equipment to photograph the artwork. When I went to the Berlin Philharmonic, I was able to bring that equipment with me, so I used a 100-megapixel digital back and a camera body to take the photographs.

MC: Did you notice anything interesting about the Philharmonic when you were photographing it?

CE: One of the things that struck me immediately when I took my camera out was that it didn’t feel like work to photograph this space. I was almost there just to bear witness to it. It would’ve been harder to take a poor photograph of the space than it was to take a good photograph of it. It was just an absolute pleasure to shoot. 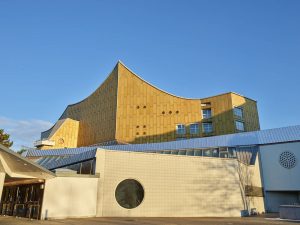 MC: Emily Pugh, one of the curators of Space for Music, mentioned there was a strange space labeled “TV” at the back of the Philharmonic. Could you tell us more about it?

CE: At the back of the Philharmonic there’s an angled protrusion with a V cut out of it. That area was initially created to put in a television camera. At the time the Philharmonic was constructed, television was a new thing. It was high, very avant-garde technology in Germany at that time. And it’s important to acknowledge that the Philharmonic is in Berlin, which was a city you couldn’t access—it was surrounded by East Germany. This was a space that was actually designed to democratize the experience of viewing an orchestra and also to capture the images and view them in their home.

So this space was actually built not only to democratize the experience for the people sitting in it, but to democratize it for the entire world. So they built this one area where you can see perfectly down the concert hall into the stage, and of course the irony is that now that’s not quite as big a deal, so they just have a spotlight stuck in that hole, and they just have other cameras in other places.

MC: What are some differences in your approach when photographing a building for 3D modeling versus for traditional documentation?

CE: The differences between photographing for 3D modeling and, say, still capture for promotional use or to document a building is that there’s very little interpretation involved in 3D capture. It is a literal representation, a literal recreation of the physical space. When photographing a building for a still image meant for documentation or promotion, there is a layer of interpretation, no matter how literal you’re trying to be. 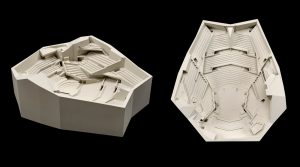 MC: What communities or initiatives do you think will benefit the most from the 3D modeling of existing or historical buildings?

CE: There are the obvious benefits for industry or urban planning, but the history of urban planning or architectural studies have a lot to gain from this technology. It opens up broader avenues to scholarship that don’t exist currently.

There’s a researcher at MIT who’s doing a fantastically interesting project where he’s using drones to take photos of buildings, stitching the photos together through photogrammetry and then inserting those stitched-together 3D objects of the buildings into Google Earth, which allows you to then perfectly understand the physical constraints of the building in a physical plane by exploring them in Google Earth. This is a use of 3D technology that speaks to what’s coming down the road for us.

MC: Do you think that 3D modeling democratizes architectural history?

CE: I would say that 3D technology is a force to help democratize the architectural experience. I think it allows students, researchers, and the general public to understand a building that they may never be able to step foot in, to be able to access it in ways they never could physically or in real life.

I think a perfect case in point is the project with the Berlin Philharmonic, where we created this 3D model of the interior, not to have a computer model, but then to make a 3D printed model of it so that we could have an absolute representation of this beautiful physical space that exists in Berlin inside of an exhibition in Los Angeles. We can show the juxtaposition between this building in Berlin and a building that it directly influenced, which is the Walt Disney Concert Hall made by Frank Gehry in Los Angeles. We can show the two models side by side for a direct comparison that is frankly not possible in real life.