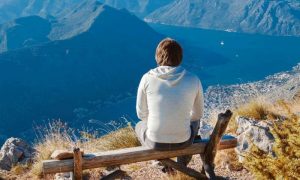 Does living at a higher altitude affect your mental health? VAndreas/shutterstock.com

Suicide is one of the top 10 causes of death in the U.S. In the next 20 years, it’s expected to cause more than 2 million deaths per year worldwide, ranking 14th in the world as a cause of death.

There are many factors known to affect an individual’s risk for suicide. For example, people who are older, male, white, divorced, low-income, isolated or who abuse substances are all at higher risk. Psychiatric illness, mood disorders and lack of social support are also recognized risk factors.

Several studies have demonstrated geographic variations in suicide patterns in the U.S., with higher suicide rates in western states. Our ongoing research expands on those findings, showing that Americans who live in higher-altitude counties are at a higher risk for suicide.

Increased elevation has been known to have a protective relationship with certain medical illnesses. For example, people who live at higher altitudes are somewhat less likely to die from coronary artery disease or stroke. But increased elevation may also enhance psychological problems, such as panic attacks.

Previous studies have reported a significant association between suicide and altitude. One study showed a strong positive relationship between average state altitude and suicide rate. For example, in Utah, the average geographic altitude is about 6,000 feet, and the rate of suicide is 70 percent higher than average.

These studies suggest altitude is a significant risk factor for depressive symptoms and suicide. However, average state altitude doesn’t provide a very close look at the relationship between suicide and altitude. Altitude could vary widely across the state, so the average may not properly represent the elevation for each place.

Risk across the US

As part of an ongoing project, our lab has examined all 3,064 contiguous U.S. counties with average county elevation to access whether there is a significant association between suicide and altitude. 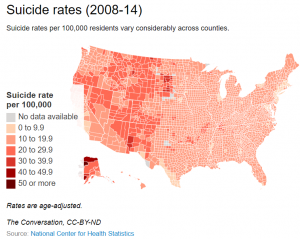 Looking at average altitude for county, rather than center of county or state, would better represent the elevation for each place. We calculated the average elevation based on the total number of 30-meter by 30-meter grids in each county.

We looked at suicide data from the National Center for Health Statistics for every U.S. county between 2008 and 2014. Calculations for average county latitude came from the U.S. Geologic Survey. Alaska and Hawaii were not included in our analysis, because digital altitude information was not fully available.

Our findings suggest a need for further investigation into the extent by which altitude may serve as a triggering factor for suicide. This could have major implications in how medical professionals understand the causes of suicide.

We controlled for multiple socioeconomic, demographic and clinical factors, such as unemployment rate and the ratio of population to primary care physicians. This did not change our findings. In other words, this novel finding is not explained by county differences in socioeconomic and demographic factors.

Why might counties at higher altitudes – primarily observed in the western region of the country – be more likely to have higher suicide rates? One reasonable explanation could be the effects of hypoxia, or a deficiency in the amount of oxygen reaching the tissues. This can influence the body’s metabolism of serotonin, one of the neurotransmitters related to aggressive behavior and suicide. Several studies suggest that chronic hypoxia increases mood disturbances, especially in patients with emotional instability.

However, without further clinical study, it is difficult to pin down exactly what biological mechanism is affected by altitude.