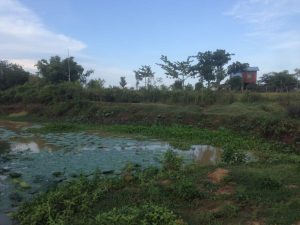 All we could do was smile at each other. My host family, not being able to say much in English, and me knowing even less Khmer, just sat around and smiled. But it wasn’t an uncomfortable kind of silence. I was actually glad not to be speaking English, or speaking at all, for some time.

I was doing a homestay in Tapon, Cambodia, in a small village outside of Battambang. After being in the Tourist flytrap known as Siem Reap for too long, I was relieved to get out and away. Far away.

Tired of having salespeople on the streets practically assaulting me by shoving their menus in my face as I walked by, or yelling when I walked past without buying something from them, I was glad to go somewhere where I could renew my view of the country and its people, as Siem Reap and the Thai-Cambodia border (where I had to avoid the “bus scam”) were my first two experiences of the country—sad, yet understandable behaviour, given the country’s history of warfare under the Khmer Rouge dictatorship and the economic opportunism that takes over during a period of instability.

This experience did it. Within minutes of arriving, I felt welcomed and at ease. I no longer felt like a mobile ATM for touts to target, but like a human being seen on the same level of humanity.

But I wasn’t just glad to be somewhere different than Siem Riep. This place truly was sublime, and a memorable experience that rivalled even the famous ruins of Angkor Wat. 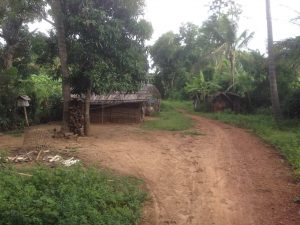 Shortly after arriving, my hosts asked me if I’d like to go to the market with them. Sure thing! I hopped on a small but sturdy old-school three-speed that I had to pedal by bowing my legs out far to the sides to avoid hitting the curved-in handlebars. I pedalled along slowly while the mother and two daughters rode their motorbike slowly, just behind me.

Arriving at the market, I browsed around while they picked up some fresh food for dinner: a shopping bag full of greens, some tomatoes, a couple of dragonfruit, eggs. I watched as the mother dispensed 1,000 riel here, 300 riel there—tiny amounts by Western standards, in the range of a quarter to 75 cents for most things.

A tour group arrived later the next day. They walked straight to the main road and back to the house shortly thereafter. The main road just about anywhere in Southeast Asia looks the same—just a big road with some ugly concrete buildings plopped on either side. The usual places: convenience store, mobile phone shop, motorbike repair, etc.

There’s nothing new or different about it. You’ve seen one main road, you’ve seen them all. I couldn’t help but think how boring an experience like this could be, if you were to just arrive at a homestay late in the afternoon, walk to the main road and back, eat dinner, sleep and then leave the next morning. I talked to a couple of travellers who’d done that, and they complained about how hot the room was where they’d slept. Seemed like a total waste of time for them.

That’s one of the reasons I avoid tour groups at all costs. The tours are so short that you rarely get to experience the substance of a place. You’re just checking off boxes: did this, saw that, without getting down to the real meaning of a place. 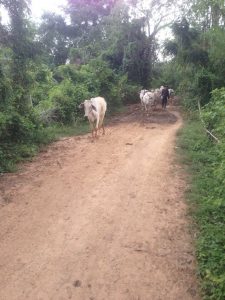 I spent much of my time walking the village—the backside of the village, away from the main road. With thick, lush forest all around me as I walked, I was enveloped in green. Strolling along the creek, a group of cows trundled past, their owner urging them along. I slowed to their pace.

Three preteen boys shouted “Hello!” to me as I walked by. They were wading in opaque, mud-laden water that had a consistency and colour more similar to chocolate milk than ordinary water. My first thought was, with all those cows around, the water couldn’t be good for their health. But after seeing the smiles and joy the kids in the village of Tapon possessed, I began to think it was all just as it should be.

I kept on walking through this spread-out village, until I came to the far end. Muslims lived here in their own little enclave. The only thing that really distinguished this part of the village from the rest was that all of a sudden, the people were dressed differently, wearing the traditional Muslim outfit. And, of course, there was also the presence of the little plain white mosque in the central part of the village.

The Muslims and Buddhists get along in Tapon. They just live separately for the same reason any ethnic minority chooses to stick with its own people.

Having walked quite far out, I took a wrong turn as I headed back to the house. But I learned quickly that there’s no getting lost in Tapon. Being the only white guy around, the village kids knew exactly where I was staying, the homestay with Sambath’s family. So a troop of kids were excited to guide me back the half-kilometre, their numbers slowly growing as we paraded through the village. Eventually, we numbered more than a dozen kids, ranging from the teenage leaders of the pack to the tiniest five-year-olds struggling to keep up to the big kids.

The homestay was a simple experience. Not much really happened, nor was there any big, shiny monument to gawk at, but this experience was one of the best and most memorable times I had in Cambodia. I was happy to get past the scams and hard sells that earned the country the reputation of Scambodia, in order to see a totally different side of the place. I was glad to see the genuine people of this nation working in rhythm with nature, as opposed to those people who’ve been corrupted by the tourist trade.