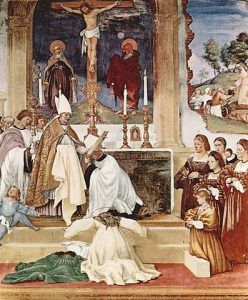 A bishop granting indulgences in a fresco by Lorenzo Lotto, c. 1524 (Wikimedia Commons)

To understand the rapid spread of Luther’s ideas, a brief account of the role that the Church played in Medieval society is necessary.

To understand the rapid spread of Luther’s ideas, a brief account of the role that the Church played in Medieval society is necessary. In the wake of the fall of the Roman empire, the Catholic Church filled the power vacuum it had left behind and went on to enjoy nearly a millennium of institutional dominion throughout Europe. While its authority was at times  imperiled, as in the Western schism of the fourteenth century), its teachings and rituals gradually embedded themselves in the daily lives of the faithful. Much like the Roman empire before it, however, the Church’s overextension of both territorial domain and bureaucratic machinery ultimately proved a corrupting force. One such instance of corruption—and the principal target of Luther’s Ninety-Five Theses—was the doctrine of indulgences, a practice predicated upon the belief that one’s journey to eternal salvation could be expedited by means of worldly works. In the hands of Church functionaries eager to pad their own coffers, these “works” all too often assumed the form of monetary payouts rather than pious acts.

Enter Luther. Indginant at such abuses, he modestly aimed to reform the Church from within. Little did he know, however, that his criticism would ignite a conflagration of religious animus that was to engulf all of Europe. In retrospect it is not difficult to see why this happened, since ultimately at stake in this dispute was nothing less than the authority to determine legitimate interpretations of scripture and rituals of worship. Hence the crux of Luther’s thought is frequently summed up in two Latin phrases—sola fide (“by faith alone”) and sola scriptura (“by scripture alone”). In short, Luther argued that the relationship between man and God is a fundamentally personal one, nurtured by individual faith and subject to no greater authority than the Bible itself. Thus Luther’s critique led logically to the rejection of any intermediary authority that might stand between man and God. Moreover, no longer would mere affirmation of dogma or participation in ritual suffice to vouchsafe one’s spiritual health—rather, the individual took center stage, called upon to actively and directly participate in his faith.

And yet, to circumscribe the Reformation solely within the sphere of theological disputation is to mask the complexity of both its birth and afterlife. A confluence of social, cultural and economic factors contributed to Luther’s ideas taking root in European society, not least of which were the numerous political factions who had their own (often material) reasons for abetting the overthrow of papal authority. The rapidity with which these ideas were disseminated across the continent is unthinkable without the countless tracts, pamphlets and leaflets issued by Protestant proselytizers from the recently-invented printing press. This deluge of propaganda was communicated in the vernacular German rather than ecclesiastical Latin—a material effect of Luther’s insistence that scripture alone holds spiritual authority over the Christian fellowship. This considerable body of literature spurred in turn a newfound valorization of public education. Such ramifications could easily be multiplied—suffice it to say that, much like the French Revolution of 1789 or the World Wars of the twentieth century, the Reformation was a truly continental movement that touched every aspect of its society to the quick. Europe would never be the same.

Calvin’s first work was a humanist work of classical scholarship, a self-published edition and commentary on the Roman philosopher Seneca’s “De Clementia” in 1532.  The rest of his publications were dedicated to religious matters. Calvin’s numerous written works include theological treatises, biblical commentaries, sermons and letters, as well as regulations, liturgy, and catechisms for the Reformed Church. His most famous work, the Institutes of the Christian Religion, was first published in Latin in 1536 as a short statement of the beliefs of the reformers being persecuted in France; it included a preface urging King François I to take up the cause of reform himself. Calvin continued to expand the work throughout his life, so that the final Latin/French versions of 1559/60, five times longer than the first edition, offered a systematic exposition of Reformed Protestant doctrines.

Humanism and the Northern Renaissance 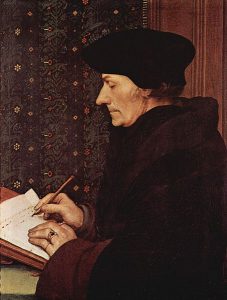 y the late fifteenth and early sixteenth centuries, the Italian cultural movement known as the Renaissance had spread to the towns, universities, and princely courts of Northern Europe. In contrast to the ‘civic humanism’ of the Italian city states where the Renaissance began, the leading figures of the Northern Renaissance often thought in terms of royal government and emphasized a ‘Christian humanism’ concerned with religious texts and issues. Northern humanists such as John Colet (d. 1519), Jacques Lefèvre d’Étaples (d. 1536), and “Prince of Humanists” Erasmus of Rotterdam (1466-1536), highlighted the importance of living a moral life over understanding theological subtleties or carrying out complicated religious rituals. In keeping with the humanist appreciation for the classical past, they often emphasized the importance of a scripture and treated Early Christian communities as a classical model to be emulated and restored. Erasmus also applied humanist philological methods to religious texts in his critical edition and Latin translation of the Greek New Testament, the basis for many later translations of the Bible by Protestants. The concerns and ideas of these thinkers had a strong influence on the first Reformation activists, even though most of the Christian humanists alive at the beginning of the Reformation chose to stay within the Catholic Church.

During the mid-sixteenth century, the fluidity and creative energy of the first wave of Reformation began to harden into new institutions, theological systems, and social identities. The sixty years leading up to the Thirty Years War (1618-49) are often described as the era of “confessionalization,” when religious affiliation became increasingly important in daily life and when both Catholic and Protestant leaders focused on building solidarity, obedience and uniformity within confessional boundaries. The Catholic Church’s measures to counteract the spread of Protestantism (the Counterreformation and Catholic Reformation) were embodied by the Council of Trent (1545-1563), which issued new statements of Catholic orthodoxy on issues such as salvation, scripture and the sacraments, and laid foundations for new institutions like the Office of the Inquisition, the Index of Prohibited Books, and religious orders such as the Jesuits and Ursalines. The divisions among Protestants became increasingly sharp in these decades as well. In the Zurich Consensus of 1549, for instance, Reformed followers of Calvin and Zwingli agreed upon a common position on the Eucharist distinct from Catholic and Lutheran doctrines.  Both Reformed believers and radical Protestants such as the Anabaptists were excluded from the 1555 Peace of Augsburg which established that German principalities could be either Catholic or Lutheran following the confession of their rulers. 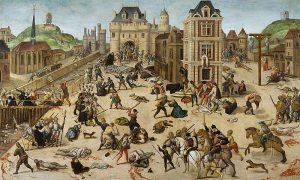 St. Bartholomew Day’s Massacre by François Dubois, c. 1572-84 (Wikimedia Commons) A period of religious tolerance in France ended when King Francis I instituted new measures against the Huguenots in 1534.

A period of relative religious tolerance in France came to an end in 1534 following the “Placards Incident,” when several major cities were plastered with anti-Eucharist posters in a single night. Recognizing this event as a political threat, King Francis I instituted new measures for the repression of Huguenots (French Reformed Protestants), including chambres ardentes, special courts for the prosecution of religious reformers. Despite these policies, the numbers of Huguenots continued to grow so that roughly 10 percent of the general population and 40 percent of the French aristocracy adhered to the reformed religion by 1561 (Dunn, XXX).  Tensions between Huguenot and ultra-Catholic factions of the nobility grew during the regency of Catherine de Medici for her sons François II (r.1559-60) and Charles IX (r. 1560-1574), and finally erupted into outright war following a massacre of Huguenot worshippers at Vassy in 1562. For the next forty years, France experienced brutal warfare, assassinations, persecution, riots, and bloody massacres finally calmed by the accession of King Henry IV (r. 1589 – 1610). In 1598, Henry IV issued the Edict of Nantes, establishing a limited but still unprecedented toleration of Protestants within officially-Catholic France.

The citizens of Geneva became Protestant in the course of declaring independence from the town’s lords, the local bishop and the Catholic Dukes of Savoy. This assertion of civic independence was the context of Calvin’s invitation to Geneva, and many of Calvin’s reforms and his growing influence sparked resistance within Geneva’s governing elite. Much of Calvin’s early career in Geneva was shaped by his struggles with the opposition faction he derisively nicknamed “the libertines.” Around 1553, this political discord boiled over in an attempted coup on the town government that was ultimately put down through the exile or execution of its leaders.  Nevertheless, by the time of his death, Calvin was able to successfully institute a program for reforming worship and morality in Geneva. Town and church government remained distinct, but closely interconnected in the Genevan system. For instance both church leaders and representatives from the town government were involved in the Consistory, a court that dealt with a range of issues including laughing in church, marital discord, ignorance of the Ten Commandments, and ‘Catholic’ ritual acts such as lighting candles for the dead. Geneva also established the Academy for the education of Reformed ministers, and a sophisticated system for distributing charity to refugees arriving in the city from France. Thanks to both Calvin’s writings and the number of influential religious exiles passing through the city, Geneva’s social organization became a model for other Reformed communities throughout Europe and the Americas.

Alistair E. McGrath, A Life of John Calvin: A Study in the Shaping of Western Culture, (Oxford, U.K.: Blackwell, 1990)