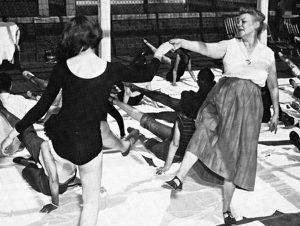 While researching the role of dance as a form of therapy for the latest Wellcome Collection exhibition ‘Bedlam: the asylum and beyond‘, I discovered a richly illustrated cross-cultural discipline that spans many centuries.

It quickly became clear that dance has long been associated with well-being particularly when associated with music and belief. We know this through the many depictions of the practice. Despite this fact, it was not until 1916 that dance was first considered as an effective form of psychotherapy by Carl Gustav Jung.

Jung’s idea of dance movement as an expression of active imagination offered an insight into so-called depth psychology and was explored by dance therapy pioneer, Mary Whitehouse in her dance clinics in  the 1950s. Whitehouse, a trained psychotherapist, encouraged participants to engage in expressive improvisational movement – a practice known as authentic movement that continues today – to allow free association thereby integrating emotional, social, cognitive and physical aspects of the body.

From the 1930s to the 1950s dance therapist Franziska Marie Boas taught “creative” and improvisational dance from her New York apartment which became known as the ‘interracial’ Boas School of Dance. It is perhaps no surprise that her tenant, Andy Warhol, became intrigued by dance while living there in a partitioned part of her apartment. Works such as Dance Diagram (1962) were influenced by his experiences there.

Janet Adler, a student of Marian Chace, continued the work of Mary Whitehouse in the first ‘authentic movement’ dance therapy school in America, which she established in 1981. As a practice, this form of dance therapy bridged many traditions: therapy and meditation, individual and community process, ritual and improvisation. Adler was particularly interested in embodying collective consciousness. She did this through working within a circular group in which each person’s movements were sensed through closed eyes and to the beat of a rhythm performed by one of the group. This was recorded in Adler’s documentary films about her practice:

The psychotherapeutic use of group movement that was championed by the likes of Boas, Whitehouse and Adler is, it seems, steeped in age-old traditions. The circle dance is said to be the oldest dance known and is a ritual that has been practiced across many different cultures.

Sufism is a practice that incorporates a dance that involves individual turning or ‘whirling’ to music as a core part of the act of worship. As well as having a deep transforming effect on the turners, the whole ceremony has a profound inner symbolism, which represents mankind’s inner journey back to the realisation of his essential oneness with God and the unity of all creation. In a drawing from ca. 1850 of a ‘Mevlevi, or whirling dervish’ the dancer is shown mid-whirl. The act of whirling helped the dancer enter a trance like state that enabled him –  traditionally this was confined to men – to get closer to God. 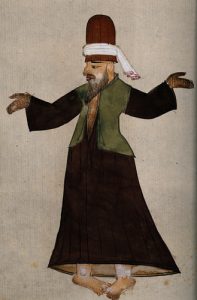 Music and dance could also have practical healing properties. The bite of the ‘wolf-spider’ found in Apulia, Italy, was believed to cause a hysterical condition which became known as astarantism, or the the tarantella. 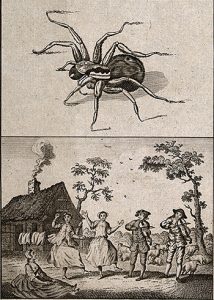 People dancing and playing music as an antidote to a tarantula bite. Etching. Wellcome Library reference no. 18611i.

In fact the more one delves into this dancing tradition, the more one finds. The close connections between the sensory physicality of dancing and the uplifting and, it seems, often devout, sense of being that occur when the two disciplines meet is fascinating in itself. Dance has always been and always will be an integral part of mental and general well-being.