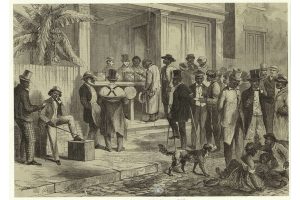 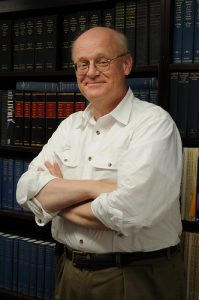 There is no Society for Historians of Reconstruction. That should tell you something. There are also no Reconstruction re-enactments, and no museums teeming with artifacts of Reconstruction. Because what, after all, would there be for us to re-enact? The Memphis race massacre of May 1-3, 1866? And what artifacts would we be proud to display? Original Ku Klux Klan outfits (much more garish than the bland white-sheet versions of the 1920s)? Serial-number-identified police revolvers from the New Orleans’ Mechanics Institute killings of July 30, 1866? Looked at coldly, the dozen years that we conventionally designate as “Reconstruction” constitute the bleakest failure in American history, and they are all the more bleak for squatting, head-in-hands, between the towering drama of the Civil War and the savage conflicts of the Gilded Age. As a nation, we delivered four million African American slaves from bondage, at the hideous cost of a generation of American youth and the murder of our greatest president — and then allowed the freedpeople to slip back into the leering control of the same Southern white ruling class which had caused the war in the first place. If slavery was the birth defect of the American founding, Reconstruction was its principal malpractice case. 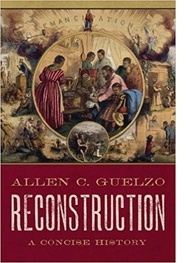 Reconstruction’s historiography has not been much more cheerful. Despite its deformations, Reconstruction was actually one of the first subjects to become the focus of an entire school of professional historical practice, in this case the “school” created by William Archibald Dunning at Columbia University before the First World War and the students (and dissertations) he guided into explorations of Reconstruction in the former Confederate States.

It was quite a “school”: Walter Lynwood Fleming on Alabama (1905), J.G.D. Hamilton on North Carolina (1906), Charles Ramsdell on Texas (1910), William Watson Davis on Florida (1913), C. Mildred Thompson on Georgia (1915). And these were all models of patient and meticulous research (even David Donald admitted that the Dunning dissertations were “triumphs of the application of the scientific method to historiography”).1 But they also sang, with some isolated exceptions, what amounted to Act II of the Lost Cause Opera – that from 1865 until 1877, the trampled-down and misunderstood white South was disfranchised, oppressed, and humiliated by a bizarre alliance of vengeful Northern “carpetbaggers,” sell-out Southern “scalawags,” and incompetent black stooges, fresh from picking cotton. Together, the Dunningites painted this misalliance as carnival of misrule, in which corruption and self-enrichment were screened behind Yankee bayonets and an attitude of hypocritical moral superiority, until the Northern public came to its senses, and the defeated Southern whites gained their second wind and threw the rascals out.

But the Dunning School’s over-reach generated an equal but opposite re-action, starting with W.E.B. Du Bois’s Black Reconstruction in 1930, and climaxing over the next generation in Kenneth M. Stampp’s The Era of Reconstruction (1967) and one of the single greatest pieces of American historical writing, Eric Foner’s massive Reconstruction: America’s Unfinished Revolution (1988). Composed in the shadow of the Civil Rights Movement and the “Second Reconstruction” of the 1950s and ‘60s, the New Reconstruction historiography turned the tables on the Dunning School. Far from being an exercise in corruption and debased democracy, argued New Reconstructionists, the Reconstruction years of 1865 to 1877 had been a valiant effort to make good on the promises of equality made by the American founding and sanctified in the blood of the Civil War. The carpetbaggers and scalawags were not opportunists, feeding like kites on Southern defenselessness, but crusaders in pursuit of an egalitarian democracy, and the freed slaves were the banner-carriers of a new birth of labor freedom. That they failed was a tragedy to be mourned, and the blame lay equally with Northern Republicans who lacked the stamina to sustain the idealism of the war years and revanchist white supremacists in the South who shamelessly terrorized blacks and their white allies into submission.

Like the Dunningites, however, the New Reconstructionists had their own problems with over-reach. Du Bois, Stampp and Foner all operated in differing degrees from Marxist premises, and great was their temptation to see Reconstruction, not as a political event, but as an economic and social one in which the real issue was a struggle of classes, with race sometimes acting as a surrogate for class, and sometimes as a barrier. Just as European Marxists re-wrote the Paris Commune into a fable of failed social revolution, Reconstruction became, in the hands of the New Reconstructionists, the great missed-opportunity of the American 19th century to tear America away from the strangling hands of industrial capitalism.2 Still, as Foner insisted in his subtitle, Reconstruction was, as a revolution, also more unfinished than failed, thus opening the suggestion that the brave new world envisioned by those dozen years might yet become a part of the American future.

But Reconstruction has proven to be a more balky and diffuse era than either the Dunningites or the New Reconstructionists supposed. The crusaders, black and white, who hoped to build a new South out of the ashes of the old plantation order had no plans for a proletarian paradise. Quite to the contrary, they were plain and eager in their demand for a thorough-going capitalist effacement of the kingdom of the thousand-bale planters. Northern republicans had, after all, waged their war on behalf of free labor (an ideology whose greatest expositor has always been no one other than Eric Foner), and what they expected to create in the defeated Confederacy was a mirror image of small-producer manufacturing and independent family farms. The Union “represents the principles of free labor,” declared a New York pamphlet, and only when “the victory of the Northern society of free labor over the landed monopoly of the Southern aristocracy” was complete could the Civil War be declared over. “Reconstruction,” added Frederick Douglass, will “cause Northern industry, Northern capital, and Northern civilization to flow into the South, and make a man from New England as much at home in Carolina as elsewhere in the Republic.”3

No one offered a more vigorous second to that motion than the freedpeople, who wanted nothing so much as to become self-interested bourgeois owners of property. “The colored man is not content when given simple emancipation,” lectured John Mercer Langston, “he demands . . . to acquire, hold, and transmit property.”4 Reconstruction, on this point, was a bourgeois revolution, not a proletarian one. That it was overthrown by 1877 was due largely to Reconstruction’s failure to dislodge the anti-capitalist feudalism of the slaveocracy. The Constitution’s ban on bills of attainder (along with Andrew Johnson’s indifference to the property-owning aspirations of black people) prevented the wholesale confiscation of the lands of the rebel leadership and their redistribution to the slaves who had worked them for decades. (This, in defiance of the Lockean dictum that mixing one’s labor with land produces property.) As a result, in western Alabama’s “black belt,” the landowners who possessed at least $10,000 in real estate in 1860 were, by 1870, still pretty much in charge socially and economically, the Civil War notwithstanding.5 Likewise, the patterns of slave-holding translated almost exactly into the patterns of sharecropper exploitation: in 1860, 75% of Southern slaveholders owned under ten slaves; in 1900, 75% of landlords employed two sharecropper families – again, approximately ten people.6 Dispossessed blacks simply exchanged slavery for what Georgia planter William Hodgson called a “state of serfage or ascription to the soil.”7 It was the 19th century’s most stupendous example of a successful repulse of Enlightenment liberalism by Romantic reaction. The Ku Klux Klan’s robes did not mimic Ivanhoe by mistake.

Understanding Reconstruction as a bourgeois revolution – in fact, according to Barrington Moore, the last bourgeois revolution – creates an opportunity for a third re-visioning of Reconstruction, and without the Eurocentric necessity to make it conform to the New Reconstructionists’ Marxism or the Progressive racism that fueled the Dunningites.8 We are already beginning to see a galaxy of new questions about Reconstruction take shape, and to find in work like Mark Wahlgren Summers’s The Ordeal of the Reunion: A New History of Reconstruction (2014) an understanding of what Reconstruction actually did accomplish, in Gregory P. Downs’s After Appomattox: Military Occupation and the Ends of War (2015) the chronic unwillingness of Americans to fund post-conflict regime changes, and through Forrest A. Nabors’s From Oligarchy to Republicanism: The Great Task of Reconstruction(2017) an appreciation of the hitherto-ignored role played by Northern Democrats in league with their quondam Southern allies in paralyzing Reconstruction efforts.

These new movements may not be enough to get us a Museum of Reconstruction, and I have to confess a certain shrinkage at the prospect of what a Reconstruction re-enactment might look like (that will depend on who writes the script). But why not a Society for Historians of Reconstruction? It is time to bring Reconstruction home to us all, not as a Southern event or even the shadow of a European one, but as a uniquely American one, on an American landscape.

6 James Oakes, “The Present Becomes the Past: The Planter Class in the Postbellum South,” in New Perspectives on Race and Slavery in America: Essays in Honor of Kenneth M. Stampp, eds. Robert Abzug & Stephen Maizlish (Lexington: University of Kentucky Press, 1986), 151.

7 Clarence L. Mohr, On the Threshold of Freedom: Masters and Slaves in Civil War Georgia (Athens: University of Georgia Press, 1986), 292.

8 Moore, Social Origins of Dictatorship and Democracy: Lord and Peasant in the Making of the Modern World (London: Allen Lane, 1967), 112.