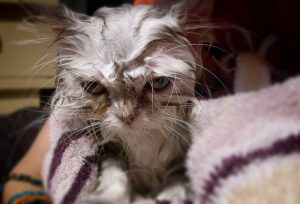 I am a believer in tackling problems at the source. I would much rather patch the hole in the boat than keep on endlessly bailing.

Cat problems are especially sensitive to this approach. If we do not fix the source of the issue, our cat’s stress will increase. That means even our bailing attempts will stop working.

No matter how distressing the behavior is to us, we need to remember that the cat is not doing this to distress us. The cat is doing this to send a message.

The cat is not going outside the litter box because they hate us. The cat has a problem and they are asking for help.

Cat problems only seem adversarial because we are not aware of why the cat is acting this way. In the vacuum of motivation, we react to the situation: the mess on the carpet, the stuff knocked over, the cat wailing in the middle of the night. These are upsetting, no question.

But the cat is not doing this to us.

The cat is reacting to an upsetting situation of their own. Their reaction is often disruptive and difficult because they are so unhappy and stressed by it. It unavoidably impacts our shared space because that is where they live. With us.

Too often, there are repeated incidences of unwanted behavior because the person continually tries to stop the behavior. This is doomed to failure, since the cat is doing the behavior for a compelling reason of their own. In addition, we can never compel the cat to act in certain ways.

When we turn our head around, and regard that upsetting incidence with the cat as an incidence of the cat being upset; we have taken the first step towards actually solving the problem.

Our cat is doing their best to tell us what the problem is. They are doing it by creating another problem, that’s true, but they have to work with the tools at hand.

Litter box problems are centered around two systems: the cat’s, and our litter box setup. If nothing has changed in the environment, getting the cat a medical checkup should be the first step. But if we have moved the box, changed our brand of litter, added a new person to the household: then the problem is probably how we are handling the litter box system.

I often have people complaining that the cat wakes them up to get food. This may or may not be true: the cat could be lonely or bored, and what they get is food. Or they could feed the cat more often, or leave food out at night, and see if it really is a food-related situation.

If the cat keeps asking for something, there’s a simple reason: they are not getting it. It’s possible that we are the ones “not getting it” because we misinterpret what the cat is saying to us. If our response to the problem is not fixing the issue, we are responding to the wrong problem.

Instead of guessing at what the cat wants, we should ramp up our ability to find out.

Communication moves like Show Me or Hot and Cold are great ways to interact with our cat to get more information. Our cat wants to show us what the problem is. If this problem has a geographic location, they will go there if we indicate we will follow.

It can be trickier if what our cat wants is not a concrete object or location. If what they want is an abstract concept like more affection, play, or discussion, they can be less forthcoming. This is where practicing our communication comes in so handy.

I wrote this post during a morning full of the unexpected. A giant power outage had disrupted the normal rhythms of the house, as we consulted with neighbors and there was extra coming and going. I sat in the living room as usual on weekend mornings, but there was no music, and I was reading an actual book instead of looking at a screen.

This put exclamation points on top of all the cats’ heads.

Once things were back to normal, Tristan became obnoxious during a play session, and got mildly scolded. I knew he had reacted that way because he was anxious (and he is the least likely of our cats to shrug off the unexpected) but that doesn’t mean he can chase RJ despite RJ’s clear signal that he did not want to play.

They need more soothing in such situations, because they don’t have the advantage of knowing what is going on, and when the emergency has actually ended.

Once we wore out the cats (an excellent response to any stress situation) Tristan was still asking for my attention, but when I followed him around, he was rubbing his head on the boxes we had stacked for the recycling. He never has any interest in these boxes, so I transferred my attention from the boxes, to his head.

He was giving the boxes “affection” so I tried giving some to him, by scooping him up like a baby. That was what he wanted, because after an extended interaction, he wiggled to get down, and stopped his distress calls.

Why didn’t Tristan just climb into my lap as usual? Because the circumstances were not usual, and on top of that he’d been told I was displeased with him. He wanted me to make an overt move to show I cared.

We can never go wrong by offering affection. It at least shows we care.

Mithrandir was equally upset by the events of the morning, but he shows it in a different way. After the play session, he kept bothering Mr WayofCats for more play, even though he simply wanted to watch the birdie on the end of the wand toy fly through the air. This makes it much more boring for the human.

After some interaction with him, I realized he was looking for something to take his mind off his anxiety, so I set up some mental stimulation with a bird movie on the Chromebook. I was almost there, but not quite: he was still restless. Knowing Mithy’s feral background, I pulled his collapsible tunnel from under the storage chest and set him up.

Mithrandir has his own style, and knowing it helps us make him happy

This was the magic charm.

We can’t always leave Mithy’s tunnel out, but remembering he loves it lets us give it to him when he “asks.” I was puzzled by Tristan showing interest in something that is often around the house, but previously ignored. Then I looked at what he was doing, rather than what he was doing it at. This let me extend a solution to Tristan, which he accepted.

Mithy is still a baby, and a recovering feral, so he’s not nearly as good at asking for things as Tristan, who works human levers like the gear shift in a sports car. Knowing the power failure affected the cats put me on high alert, and helped me solve their problems.

That is another advantage of seeking out the source of the cat problem.

We have the cat eager to tell us about it.