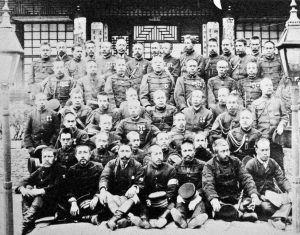 As Japanese imperialism rose and fell, its leaders interpreted and re-interpreted a single distinctive concept: “bushido”. 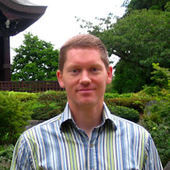 In a warning to China on the eve of his first trip to Asia in November 2017, the US president, Donald Trump, called Japan a “warrior nation” that needed to be taken seriously. Trump’s comments are just one example of the widespread view that Japan is a martial country with spiritual roots in the samurai warriors of old. But is it?

Samurai remain among the most recognisable aspects of Japanese culture and often feature in film, television, literature, and art. The events of World War II complicate this image, as the supposed samurai heritage was used by all sides to explain imperial Japan’s behaviour. The legacy of that conflict continues to affect Japan’s international relations, and controversies over history are major obstacles to reconciliation with China.

Portrayals of Japan as a martial country typically focus on the samurai heritage, especially the concept of bushido – “the way of the warrior”. Bushido is popularly seen as an ancient martial ethic that guided first the samurai and later the soldiers of Japan’s modern wars. This view overlooks important aspects of Japan’s history.

Although the samurai who ruled Japan were ostensibly a “warrior class”, they did not experience major domestic or foreign conflict for more than 200 years before the 1860s. Furthermore, there was no widely-accepted samurai ethic in pre-modern Japan – and the word bushido was largely unknown until the 20th century.

Many new nation-states emerged during the 19th century, among them all three of World War II’s Axis powers: Germany, Italy and Japan. After the Meiji Revolution that put the country back under imperial rule in 1868, the new government needed to convince the Japanese people to identify with their new nation-state. As in Germany and Italy, many people in Japan were searching for a national identity, and in search of an example, many Japanese thinkers looked to Britain, then ruler of the world’s most powerful empire.

The Britain they observed was experiencing a “medievalist” revival. Knighthood and chivalry were popular cultural themes and many public and private buildings imitated the appearance of medieval castles. These trends inspired some Japanese thinkers around 1890 to search for equivalents in their own traditions. They compared samurai with European knights and proposed bushido as a Japanese counterpart to chivalry and gentlemanliness. 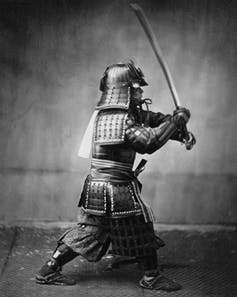 Japan’s victory over China in the Sino-Japanese War of 1894-1895 gave bushido a great boost, but also changed it. Before the war, bushido was invoked as a potential equivalent to Western ideals – after the war, the mood in Japan became more nationalistic and militaristic, and bushidocame to reflect these sentiments.

The term now implied self-sacrifice, patriotism, and loyalty to the emperor; its promoters now dismissed European chivalry as “mere woman-worship” and inferior to “manly” samurai ideals. This new “imperial bushido” rapidly became an important part of the state ideology, and was widely used in civilian and military education in Japan until 1945.

The bushido boom that took place after 1895 also coincided with a dramatic shift in Sino-Japanese relations. In the years after the war, thousands of Chinese travelled to Japan for study, business, or political exile, and those who arrived in the early 1900s – especially after Japan’s victory in the Russo-Japanese War of 1904-1905 – encountered a Japan fascinated with bushido. Chinese students studied the “way of the warrior” in Japanese schools and military academies – like their Japanese classmates, they were taught that bushido was the key to Japan’s modernisation and military successes.

They had little reason to question these teachings, as the evidence was seemingly all around. Instead, influential Chinese reformers such as Liang Qichao searched for their own bushido tradition that could help strengthen China. Chiang Kai-shek (Jiang Jieshi), who later go on to become president of the Republic of China, was a cadet at a Japanese military academy at the time. Chiang was deeply impressed by bushidoand sought to instil a similar martial spirit in China after his return.

The imperial bushido ideology was used to indoctrinate the Japanese servicemen who invaded China in the 1930s and attacked Pearl Harbour in 1941. It was not surprising, therefore, that outsiders saw Japan’s wartime activity in the context of bushido and the samurai heritage.

After World War II, bushido was comprehensively rejected as a dangerous ideology. By the 1970s, however, bushido was revived as a cultural explanation for Japan’s recovery and rapid economic growth. This new bushido generally stresses loyalty, virtue, honesty and self-sacrifice, while rejecting overtly militaristic elements.

Decades later, today’s mainstream bushido closely resembles the early theories inspired by idealised European chivalry. A vocal minority on the right is attempting to revive more extreme wartime ideals, taking historical revisionism to sometimes radical extremes – but for now at least, these nationalists remain a political minority. In China, meanwhile, Japanese bushido is understood in a way much closer to its wartime imperial meaning – in part a reflection of just how unresolved the history of World War II still is in East Asia.

The events of the 20th century are a heavy burden on Sino-Japanese relations to this day. Dealing with these issues is further complicated by some of the lingering ideas of national identity, and bushido in particular, which create distance and undermine trust on both sides.