Turns out the Egyptians weren’t the only ones who mummified their dead. 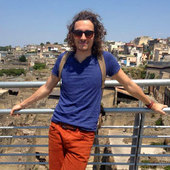 Whenever mummies are mentioned, our imaginations stray to the dusty tombs and gilded relics of ancient Egyptian burial sites. With their eerily lifelike repose, the preserved bodies of ancient Pharaohs like Hatshepsut and Tutankhamen stir our imaginations and stoke our interest in people and cultures which have long since passed away.

But the Ancient Egyptians weren’t the only ones to mummify their dead. As it happens, mummies dating back to the Bronze Age – between 4,200 and 2,700 years ago – have also been discovered in Britain. But until recently, we knew very little about how mummification was practised by ancient British societies, or to what extent. I devoted my PhD to finding out how peat bogs and bacteria affect the body after death, and helped to unravel some of the mysteries surrounding Britain’s Bronze Age mummies.

I first learnt that mummification may have been practised in Britain back in 2008, while a student at the University of Sheffield. Mike Parker Pearson gave a lecture on the evidence for mummification, based on skeletons he’d excavated at the site of Cladh Hallan on South Uist in the Outer Hebrides.

Several lines of evidence came together to suggest, rather controversially, that these skeletons had once been purposefully mummified. The tightly-flexed positions of skeletons were like Peruvian mummy bundles, and two teeth, part of the wrist and the knee of one of the Cladh Hallan skeletons, had been removed long after they had died, which suggested that the bodies had been curated for an extended length of time. 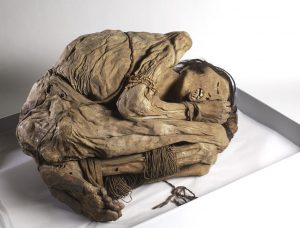 A mummified Peruvian male, who was buried in a bundle. Wellcome Images/Wikimedia, CC BY

The radiocarbon dates from one of the skeletons were older than the dates obtained from the sediments at the burial sites. This suggested that the bodies may have been buried centuries after they had died. A thorough physical examination, together with DNA analysis, showed that both skeletons had actually been constructed from the mummified parts of several individuals.

Of course, based on this evidence alone, it was possible that these mummies were outliers. Mummification could well have been a fringe practice, carried out by people living on the peripheries of Britain’s Bronze Age societies.

The problem is that the same evidence from Cladh Hallan might not necessarily be found at all sites where mummification was practised. Radiocarbon dates would not always have the precision needed to identify significant delays between a person’s death and their burial. And there was no guarantee that the extensive meddling with mummified body parts identified at Cladh Hallan was practised elsewhere.

So, it was my challenge to identify whether remains from other sites might once have been mummies, too. And I was going to have to get my hands dirty.

After we die, our gut bacteria circulate around our body through our blood vessels and begin to decompose our soft tissues. These bacteria also get into our bones and begin to eat away at the proteins, producing microscopic tunnels. Most of the bones from bodies that have been buried in the ground soon after death are filled with these tunnels, because the skeleton is essentially trapped in an enclosed environment with destructive bacteria.

Little or no tunnelling was observed within the skeletons from Cladh Hallan, suggesting that their putrefaction had been interrupted. Methods of mummification usually involve killing or removing gut bacteria soon after a person dies, in order to prevent this process. So studying the extent of bacterial attack inside bones was potentially a new way of identifying skeletons which had previously been mummies. 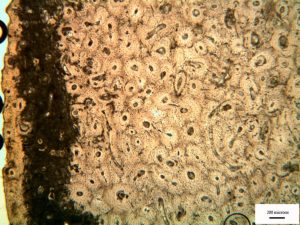 To test this theory, I examined the bone microstructure of two bona fide mummies. Both skeletons showed little or no bacterial attack, confirming that this pattern was consistent with mummification.

The Bronze Age skeletons which bore this signature came from sites located all over Britain, stretching from north-west Scotland to south-east England. This was the first evidence that mummification was practised all over Bronze Age Britain.

Some of these skeletons even hinted at the processes that Bronze Age people may have used to mummify their dead. The Cladh Hallan bones looked like they had been eroded by acid. Yet they were buried in alkaline shell sand. The nearest acidic environments to Cladh Hallan during the Bronze Age would have been a series of peat bogs – so, these bodies were probably preserved by being buried in a peat bog for a few months.

In contrast, Bronze Age mummies from Kent were discoloured in a way which suggested that they had been burnt. So they may have been preserved by being smoked over a fire.

It is impossible to say for sure exactly why Bronze Age Britons mummified some of their dead. The evidence suggests that Bronze Age people kept their mummies above ground for a number of years, or even decades: quite the opposite to the practices of Ancient Egypt, where mummified bodies were locked away in a tomb.

Both ancient and present societies which keep their mummified dead close tend to view them as being alive, in some sense. In some ancient cultures – like the Aztecs – the bodies were used to communicate with ancestors in the afterlife. Even today, human remains are innately powerful objects, which can be leveraged for political or social purposes – one modern example is Lenin’s mummified remains.

We might even reasonably guess that Bronze Age people used the mummies of their ancestors to exert rights over land, resources and power. The next step will be to examine whether mummification was practised even further afield – perhaps in mainland Europe.